Blacktail Florist gets behind its Boxers – Gastown 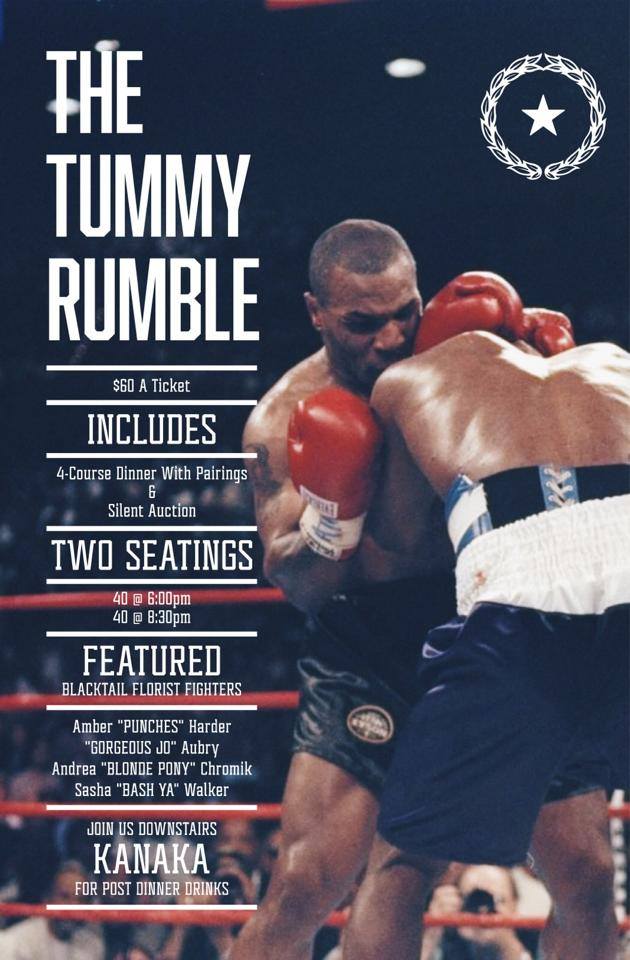 On July 23rd, restaurant workers from across Vancouver will finally come to blows…all in the name of a good cause. The third annual ‘Restaurant Rumble’ benefits Aprons for Gloves, a non-profit organization that provides community outreach through the sport of boxing. Contenders signed up several months ago and have been doing a combination of training and fundraising in preparation for the main event, now just a couple weeks away.

Of the eleven Gastown-based fighters, four hail from one of the neighbourhood’s newest restaurants, Blacktail Florist, and to help get them ring-ready, the eatery is hosting The Tummy Rumble. On Monday, July 14th, executive chef / co-owner, Jimmy Stewart, will open his doors to diners for a sumptuous ticketed dinner and an exclusive silent auction.

Hostess, Andrea Chromik, will be at the event. She’ll be vying for the Super Welterweight Title, while her co-workers, Sasha Walker, Jolan Aubry and Amber Harder duke it out in the Undercard Division. To qualify for their bout, every fighter must raise $2000 to qualify, and that’s where Blacktail is stepping in.

Each $60 ticket to the dining event will help top up fundraising efforts by the four fighters. Guests will be treated to a four-course menu of the restaurants unique array of wild seasonal products, handpicked foraged edibles in two sittings, the first at 6pm and the second at 8:30pm. There are 40 available seats for each siting and tickets can be purchased either at the restaurant (332 Water Street) or by phone at 604-699-0249.

Blacktail Florist offers a culinary journey of innovative dishes created with B.C.’s freshest ingredients. Joining Stewart behind the scenes are General Manager / Sommelier Adam Mayhew and Operations Manager Chen-Wei Lee. The menu is an exploration of culture and homage to the Pacific Northwest.

Tickets for the July 23rd Restaurant Rumble are sold out, but fans can still catch it via livestream at select locations. A full list will be available in the days leading up to the event. Undercard Fights begin at 3pm, featuring three one-minute rounds per match up. Contenders wear protective headgear in these bouts, with medals on the line. The Title Fights follow, running from 7-10:30pm. At two minutes per round and no headgear, they’ll showcase the best boxing talent in the hunt for championship belts. The entire event takes place at the Fei & Milton Wong Experimental Theatre, SFU Woodward’s.

Based in Vancouver’s Downtown Eastside, Aprons for Gloves was founded in Gastown, offering mentorship and training to youth and at-risk women. Now in it’s third year, the organization welcomes contenders from across the service industry as they hang up their aprons and put on boxing gloves – fighting each other in a professional boxing ring to raise money and support the East Side Boxing Gym.