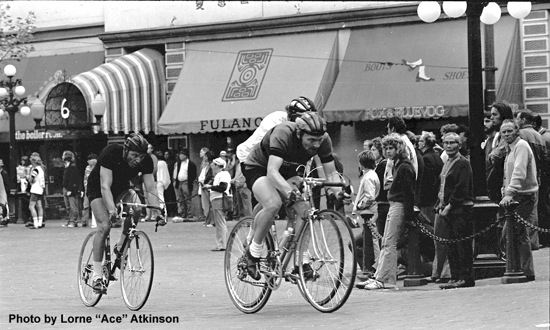 In the spirit of the Gastown Grand Prix, we found some old shots that showcase how the neighbourhood (and style) has changed.

Coming round the corner in 1973. Fox & Fluevog (before Fluevog Shoes became Fluevog shoes!) is just behind the bikers as the come around Maple Tree Square.

Dr. Roger Sumner came up with the idea to have a bike race in 1973. He wanted to create a quality race that would be highly accessible to the public and Gastown, with its historic character-filled, twisty cobblestoned streets lined with cafes and restaurants, fit the bill. Sumner himself competed in the Gastown Grand Prix until 1978. He was later inducted into the BC Hall of Fame for his 30 years of service to the sport in the roles of racer, coach, manager and racing organizer. (Tragically, he died in 2000 after being hit by a car while riding his bike.)

The first Gastown Grand Prix was held that same year and racing around the tight course proved to be electrifying from the beginning. The race ended in dramatic fashion with Bill Wild, one of the finest sprinters of the time, trading punches with transported Kiwi and three time Canadian National Road Champion, Max Grace, while battling it out in the final sprint. Wild won the race and took home first prize, which was a colour TV.

Max Grace went on to win in 1974 and is seen here accepting his trophy alongside Vancouver Mayor, Arthur Phillips (left).

Cruising down Water Street in some interesting outfits, with the old Dominion Hotel just behind (now the Lamplight at Water and Abbott).

The finish line, with Hotel Europe and Maple Tree Square just behind it. Pretty sure these guys weren’t in the actual race…

Competitors wait at the start line in 1975. We love the guy who went full hockey helmet on the left side. Photo by Stan Walkden.

By 1976, 122 elite cyclists from Canada and even Mexico were signed up to race the Gastown Grand Prix, and in 1977, racers from the US made their first appearance at the criterium, entering 25 riders. One of these riders was 18 year old Davis Phinney, who later went on to become an Olympic medalist and winner of two stages of the Tour de France.

The Global Relay Gastown Grand Prix returns on Wednesday July 15th. Come down to the neighbourhood and cheer on these amazing athletes!