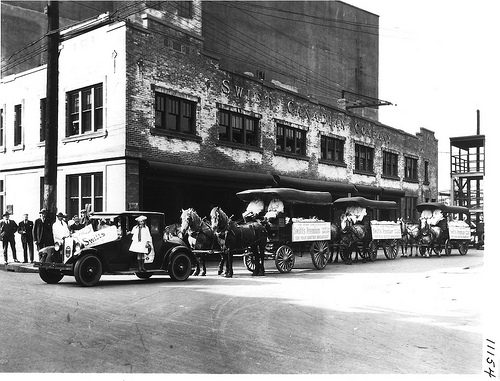 Of all the neighbourhoods to have an archive of interesting old photographs from years ago and eras passed, may we suggest that we have the best of the best? Gastown is Vancouver’s historic and cultural heart with heritage buildings holding stories from over 100 years ago. We did a little digging through the City of Vancouver Archives to discover the history of Gastown’s most celebrated buildings. Here’s a look back at The Packing House.

Designed by the Swift Canadian Company’s Construction Department, the original 1912 building was a four storey meat warehouse and packing plant.  The two storey addition to the east which included the loading bays was constructed in 1918.  The company continued to prosper and additional office space was required for the expanding business and in 1925 two storeys were added to the original building. The Swift Canadian Packing House and Office Building is representative of the importance of Gastown as the trans-shipment point between the terminus of the railway and Pacific shipping routes.  It also illustrates the development of an extensive food distribution network that grew in response to the rapidly growing local population.

It is interesting to note that this was the site of Gastown’s first butcher shop. George Black, Gastown’s first butcher, located his butcher shop on this same site as early as 1868. He sold the business to Alfred Coughtrey in 1885 who in turn sold it to Van Volkenburg & Brothers about 1888. Van Volkenburg sold his business to B.C. Cattle Co. Ltd., which later became Swift Canadian Co. Ltd.

Today, the Packing House is home to a concept store and restaurant, Secret Location.