Lest We Forget – Gastown 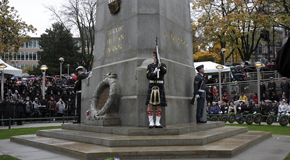 Image courtesy of City of Vancouver

The program begins with a performance by the Vancouver Bach Youth Choir and Sarabande starting at 9:45am. Led by the Vancouver Flag Party, the parade of veterans, military marching units, and bands will arrive at Victory Square (West Hastings St between Cambie and Hamilton) before the ceremony begins at 10:30am.

At 11am the Last Post will be sounded. There will be Two Minutes of Silence, during which a 21-gun salute by the 15th Field Artillery Regiment will be heard from Portside Park. Rouse and Lament will follow. The RCAF will conduct a fly-past moments later, weather permitting. The enduring In Flanders Fields will then be sung by the Bach Youth Choir and Sarabande and wreaths will be placed at the Cenotaph.

A feature will be a combined performance by the Vancouver Fire and Rescue Service and the Regimental Pipes and Drums of the Seaforth Highlanders of Canada.

The main parade will march west along Hastings past the reviewing stand between Homer and Richards, turning right at Richards, east on Cordova, then south on Cambie.

The veterans section of the parade will march west along Hastings Street past the reviewing stand and disperse.

The Remembrance Day Service at Victory Square event is organized by the Vancouver Remembrance Day Committee, a volunteer group established by the City in the 1940s with the mandate to conduct the November 11 ceremony on behalf of its citizens.