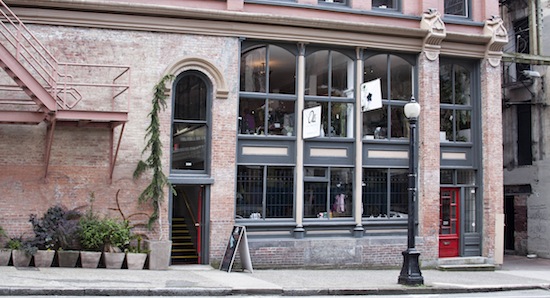 Gastown Named One of the Coolest Neighbourhoods in the World

After being named the Fourth Most Stylish Neighbourhood by Complex Magazine in 2012, Gastown has been listed again as one of the world’s coolest neighbourhoods in Stylist Magazine, and is among some of the world’s highly acclaimed “fashionable or up-and-coming” places from Paris to Amsterdam and Hong Kong. Gastown continues to be one of the best neighbourhoods in Vancouver for dining, with many new eateries joining the Gastown community including Rainier Provisions, The Flying Pig, Tuc Craft Kitchen, Bambudda, and East Van Roasters. Along with local eateries, The Portside Pub and Brooklyn Gastown joined the list of new businesses, adding to Gastown’s growing nightlife scene.

There were many accomplishments this year. Rainier Provisions opened a paris-style patio (pictured above), the first stand alone patio in the Lower Mainland, L’Abattoir became the first and only Vancouver restaurant to be awarded with the prestigious Four Diamond Rating by the AAA, and Sean Heather from the Heather Hospitality Group was honoured at the B.C. Restaurant Hall of Fame (BCRHOF), who acknowledged his work in the Active Restaurateur category.

The Expansion of Fashion & Style Gastown’s style scene has shown significant growth with the emergence of new independent boutiques such as Board Of Trade Co, Artemisia, Athena Atelier, complexgeometries, and Litchfield. Gastown’s menswear scene proves to be a force to be reckoned as new shops, Niftydo (pictured above) and FortKnight, became new stomping grounds for quality mens fashion. Pony Salon also opened its doors in the neighbourhood, and has gained a reputation for being one of the best places in Vancouver to get your haircut, coloured, and styled.

Along with the new additions, there were many things to celebrate this year. Salmagundi celebrated their 40th Anniversary and dutil denim, launched their record label, dutil. records – a few prime examples of how Gastown’s businesses are making their mark and continuing to push the envelope.

Make Music Vancouver returned to Gastown’s cobblestone streets for it’s third year on Summer solstice, celebrating live outdoor music in a spectrum of genres with live acts ranging from five-man rock bands to a full scale classical orchestra. The music festival united all kinds of talent from professional to amateaur musicians with more than 100 musical acts performing live in Gastown. The Gastown Grand Prix was back, with the help of Global Relay, for another year of nail-biting, cycling race action. Over 20,000 spectators came to watch the short-track racing action in person, filling the neighbourhood with plenty of cowbell ringing action and loud roars from the sideboards. Check out our video clips of the first gun start, the final finish line cross, and other racing moments.

Aprons for Gloves, was back for another year with an exciting Restaurant Rumble between a group of individuals from the Gastown/Downtown Eastside restaurant industry to raise funds to revive the East Side Boxing Gym. Kristofer Better from L’Abattoir and Simon Kaulback from Boneta (pictured above to the left) were among those contending at fight night.

The annual Gastown BBQ and Chili Festival returned for the second year in a row. For two days, Carrall Street was transformed into a full-blown food festival with cook-off competitions, food tastings, street entertainment, and live music. Gastown restaurants competed at the cook-off competition for best ribs, brisket, wings and chili. All proceeds from the BBQ and Chili tastings went directly to Athletics 4 Kids, a local charity that helps under-privileged children participate in team sports.

To spread a little holiday festivity, Falken Reynolds Interiors installed a variety of one-of-a-kind, holiday installations around the neighbourhood, such as a light stick tree made with repurposed fluorescent and Sapporo can wreath. You can find these unique installations on display at LynnSteven, Sea Monstr Sushi, Six Acres, Inform Interiors, Bulthaup, Litchfield, and Roden Gray.

That’s a wrap! It’s been an incredible year in the Gastown Community. Thank you to everyone for continuing to support the neighbourhood. We wish you all a very happy new year. See you in 2014!