Then & Now: Stark’s Glasgow House and The Cambie Pub – Gastown 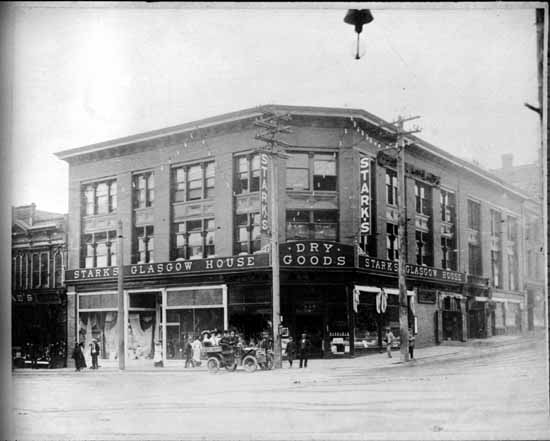 Above: Stark’s Glasgow House on 170 West Cordova Street circa 1907

At the south-east corner where Cordova meets Cambie, sits an unassuming 3-storey building. Once a prosperous dry goods & millinery store, Stark’s Glasgow House was an honest family run business whose beloved 1902 Oldsmobile (one of the earliest vehicles in the city and nicknamed ‘The Rolling Peanut’ by its owners) would help ferry deliveries around Vancouver, faithfully shuddering and sputtering along.

James Stark (originally from Scotland) arrived in Vancouver in 1892 aged 45 with his wife and five children aged from 7 to 18. He opened a dry goods store at 226 Carrall Street, then moved a few years later to 32 Cordova Street in the Dunn – Miller Block. By 1897 the business was known as Stark’s Glasgow House – although it’s not entirely clear why as James was born in Dundee. The business offered both dry goods and millinery and two sons worked with their father, joined by the youngest son William in 1903. In 1904 the business moved to their third location in 12 years; the five-year old building initially built by McDowell, Atkins and Watson, on the southeast corner of Cordova and Cambie. In 1905 the business was incorporated under the name of James Stark & Sons, Ltd.

By 1910 it was the Carlton Cafe, and soon after the Carlton Hotel. During the 1960s there were four partners running the hotel, including Maurice St Cyr, and you could get a room for $40 a month. The building became a single room occupancy hotel known as the Cambie Hotel and the Gastown Inn, but in 1997 it became the Cambie International Hostel with over 120 beds and the Cambie Pub downstairs. Today, The Cambie Pub is alive with the sounds of laughter, clinking glasses and the raucous uproar of good times. The patio is one of the neighbourhood’s liveliest, often full with young adventurers and students looking to socialize on a budget. The spirit of community, prosperity and light-heartedness still flows through The Glasgow House, paving the way for future inhabitants to make their happy mark upon its solid foundation.

Coming to The Cambie…….! This August 31 – Sept 2 Come celebrate at the first ever Cambie Fest in honour of the pubs 120th year serving Vancouver!

The Cambie is one of Vancouver’s oldest and most iconic pubs (the establishment has held a special Class A Liquor license since 1897) and they’re turning 120 years old this year! In celebration, they will be hosting CAMBIE FEST; a three-day festival bringing together Vancouverites, fellow Canadians, international friends, local artists, and community businesses. The Cambie is excited to share this birthday with Canada’s 150th, celebrating with live music, live art shows and some special Cambie charm.