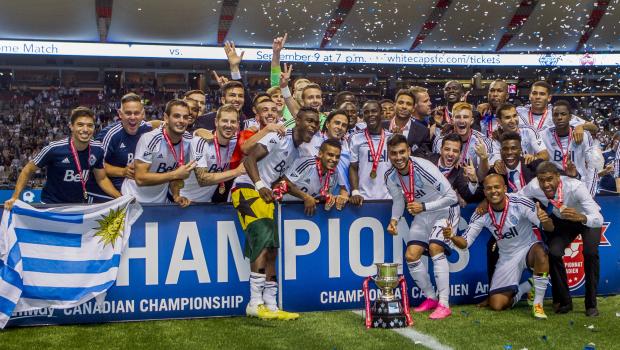 The win was thirteen years in the making and coach Carl Robinson couldn’t be happier.

“I said to the guys it’s one game. We’re one game away from making history for the club because we’ve never won this tournament before. I didn’t know whether to put a bit of pressure on them or try and take the pressure off them,” Robinson said. “I challenged them. I said to them, listen, they don’t come around too often games like this. We’re at home, it’s in our court, time to step up boys. And they certainly did that. Each and every single one of them. What a professional performance that was. I’m so bloody proud of them today.”

Almost 20,000 fans were in attendance to see the 2-0 win over the Montreal Impact and the players stayed on the field long after the game finished to celebrate and sign autographs. We’re pretty sure that everyone is holding their scarves high in the office today.

With one piece of silverware now in the trophy cabinet this season, the Whitecaps are hoping to add some more before the end of the year and have their eyes on the Supporters’ Shield, MLS Cup, Cascadia Cup and a quarterfinal place in the CONCACAF Champions League. And Robinson is hoping the Canadian Championship win will spur his squad on to further success.

In the press conference that followed, Robinson had kind words for the players that he’s been working with for the past eighteen months. “I’ve told them to enjoy it tonight because they deserve it.”

If you want to show a little Caps pride on the streets of Gastown today, you can stop by their team store in The Landing.