All in a Days Work – GSky Plant Systems – Gastown 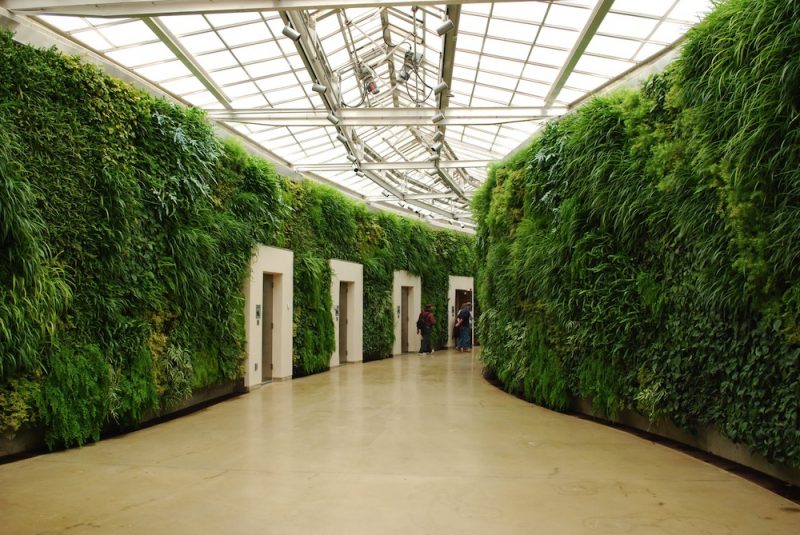 “GSky is a green business because of the very nature of what we do— design and install living walls to help the environment, people and the buildings themselves,” notes Chad Sichello, founder and President of GSky.

The firm’s extensive experience and continuing innovation has earned the trust of prestigious corporations across the globe, from developing vibrant floor-to-ceiling greenery for the lobby of a Fortune 500 search engine company, to verdant living walls for both the National Geographic Channel and Twitter Inc’s headquarters in Boston and San Francisco.

At first glance, one would assume that these state-of-the-art vertical gardens were purely for aesthetic impact, but they also serve an integral role in reconnecting people with nature, especially as we become inundated with the rise of smart phones and concrete landscapes.

The idea of integrating horticulture in urban spaces dawned on Sichello while planting trees in university. “I started to ask myself why have we not put just as much effort into restoring the green space in our cities?” he recalls.

Prior to graduation, Sichello began researching green roofs, but soon landed a job in Boston as the Director of Informatics at the ALS Therapy Development Institute (think ice bucket challenge) that seemed like it would take him away from the study. Turns out, it was only the beginning.

While developing software to aid in neurodegenerative disease research, he learned that industrial environments were a major factor in significantly increasing the number of instances of ALS. He immediately switched his focus from disease treatment to disease prevention, searching for ways to improve health and quality of life.

“I decided to jump in with both feet, moved to Japan and started working with a green roof company,” recalls Sichello. After working in Japan’s mature green building industry for two years, he returned to Vancouver and founded GSky Plant Systems. And a decade later, the firm has become a leader in green wall innovation with partners and projects throughout North America, Europe, Australia and New Zealand. With a team of 15 people, GSky is pushing the boundaries of innovation and originality by designing living walls that are not only living art, but also provide health benefits that enrich everyday living.

One of their most exciting installations can be seen in San Francisco’s South of Market District. GSky created a lush living centerpiece decorated with 1,229 feet of vibrant greenery stretching three floors high below an open skylight. The firm drew inspiration from the city’s iconic hills, designing an intricate curvilinear layout within the installation. Verdant plants act as air purifiers, removing dust and carbon dioxide – making this vertical garden a literal breath of fresh air.

In 2010, the company unveiled the most prestigious botanical garden in the US at the world-renowned Longwood Gardens in Kennett Square, PA. It became the largest green wall in North America and one of most advanced in the world with 47,000 plants stretching in length. Like the installation at 888 Brannan, this grand wall delivers impressive health benefits, providing the oxygen equivalency of 90 fourteen foot-tall trees and removing 15,500 lbs. of toxins per year.

“It takes time and effort, but the result you get back is extremely rewarding,” Sichello notes. GSky’s first international project in Kuwait – a record-breaking 5,200 square foot indoor green wall in the Avenues Mall in Kuwait – is considered the country’s most cherished landmark to date. GSky’s first international project in the Avenues Mall in Kuwait

“We’re proud of our accomplishments and thrilled that we are now in this stage of the game,” notes Sichello. “We celebrated our 100th green wall milestone last year, which is an incredible accomplishment given the downturn in the economy.”

For GSky, each project was an opportunity to innovate and create something that hasn’t been seen before – but that certainly didn’t come without a few challenges along the way.

Designing a successful wall system is no walk in the park because it has to last the life of the building and most systems break down overtime due to plant overgrowth. GSky hit a major breakthrough when they introduced a patented Versa Wall System in 2011.

After the Versa breakthrough, GSky raised the bar for business practices in the industry by working closely with network dealers, who Sichello credits to the firm’s success.

“GSky is always on the move and we’re thrilled that we are continuously expanding our international portfolio,” Sichello notes. While the details are still under wraps, he alluded to exciting new projects in Florida, California and Qatar, adding up to a total of 100,000 square feet.

“We’ve come a long way since we started and we’ve also learned a lot,” Sichello recalls. “The nature of technology is that it goes through series of changes, improvements upon improvements, and then finally arrives at the end product you envisioned.”

Remaining true to his original purpose brought the greatest reward. “At the end of the day, we’re just happy to see our vision come to fruition, which is to re-establish our connection to nature,” explains Sichello. “It’s more important than ever that we all have access to greenery.”