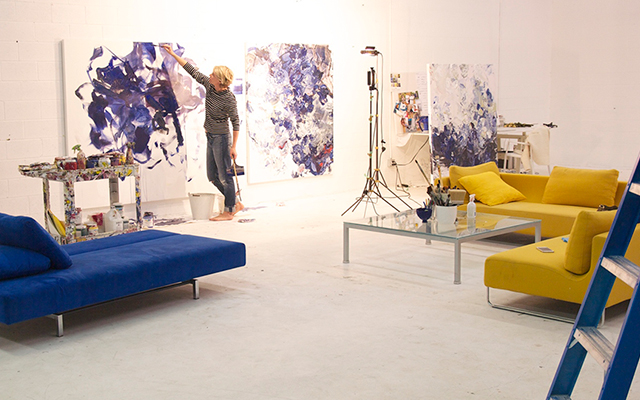 So we took the opportunity to reach out and chat with Burgers about her own personal art style and philosophy.

Where does art start in your life?

Well I’ve been painting my whole life. I started very young. But my skills have also grown up under the gallery eye. What I was doing 20 years ago is not what I’m doing now. I’ve taught, and learned, and grown. So instead of just coming in now, at this age, I’ve had all my learning and experiences through galleries. But to be honest, there weren’t any other options. Painting just seemed… it was perfect for me. I like solitude, I like solving problems.

Do you think that’s true for all artists? That they feel compelled to do their craft?

Yeah, it’s such a self-motivating purpose. There’s nobody telling you to do it when you wake up in the morning, You have to love that process because it’s always solace. You’re dealing completely with your interior, with your head space. You can’t pull somebody aside and ask, “hey, what would you do here?” That would defeat the whole point, especially with what I do.

What do you mean?

Whenever I talk to young artists, especially in my vein- I’m an immediate painter, I’m about immediate raw emotion. There’s just not a lot of painters like that right now. The leaning, especially with younger artists, seems to be more theoretical and mine is in the moment. It’s not a planned out process.

But everyone hits snags. What do you do then?

I think the best thing is to just keep moving forward. Push through it.

The word “confidence” has to come through, no matter how much you do it and especially when it’s already half way done. You have to go into the process with a lot of hope and optimism. When it’s not going the right way, it can be crippling, but you have to push yourself up and be brave. Especially if you’re a woman in this industry, it can be tough. Women painters need more of a “f##k you” attitude.

Why floral? What get’s you started on that motif?

I used to flip flop between landscapes and floral. I find ways to continually experiment, but I’m in the floral mode right now. It’s a genre that’s been defined by being domestic, feminine, meek and subservient. But for me, it’s become more about fierceness, beauty and decay. Yes, it’s feminine, but it’s angry and aggressive. I also used to paint real flowers, but I’m getting away from that for something more expressionist, more abstract. I still have a long journey to go, trying to make them less pretty. The smaller pieces are more gentle and subtle. But as the pieces get bigger, they begin to offer only a tiny hint at what the origin was, as it moves further towards the complete abstract.

Yeah the floral stuff is really interesting because it’s so obviously contemporary, but at the same time- and I wouldn’t call it “retro”, but there’s something immediately familiar about it.

I like that description. I went through this phase where I was teaching myself, where I fell into a realistic sensibility of things, and I’m still working my way out of that. It’s a slow process and it’s going to take a long time to get to where I want to go. It took me a long time to loose the vase, for example. It took me so long to figure out how those roses were just gonna “float there”.  There were so many small paces to get to that big step.

Are there are artists that you’re currently checking out?

Not really. I’m pretty old school and I personally try not to look at too many artists. I’m so sensitive to influences. As soon as I start to look at somebody else’s work, it either deflates me, you sort of start to think, “Well, what’s the point? They’re so good.” Or it influences me too heavily, which I also don’t like. I try to be self-referential. I keep a piece from each show, just to track my own progress, figure out where I’ve been, where I’m going.

But I do love Joan Mitchell, Sam Francis, anything from the last 20 – 30 years where painting was spontaneous and emotional.

Has social media changed the game for you at all?

It really has, in many ways. Being an artist, you’re so by yourself- I mean, my husband works with me, but you’re typically not sharing all the steps with somebody. You’re just showing a finished product and people don’t know where that’s coming from. It’s allowed me to show more of the process.

It’s also great because maybe people haven’t been keeping up, and you can tell them, “hey, this is what I’m doing now.” Instagram has also let me show a different side of myself and what I do. It makes me think a little bit more about my story, and what I’m trying to say. Some people are interested in what’s in my head or how I actually do the painting. Sometimes the smallest comment from an unexpected source might give me a wave of confidence to not overwork a piece. On the other hand, it’s opened up another side, which makes me a little nervous.

Well there have been a few commercial aspects, which are tempting, but I don’t know. I don’t want to ruin my precarious career as an artist by going commercial.

How did the Inform gallery come about?

Part of it was Instagram. I’ve always had a bunch of furniture in my home from Inform. And I like it, it’s artistic and functional, but it all migrated to my studio recently.

So a lot of the furniture was appearing in Instagram photos alongside the paintings. The idea was “let’s recreate this”, which at first I thought was odd, because I don’t really think about the space in my studio. But it ended up being really interesting and almost a little bit like set design. It wasn’t about creating a perfect space.