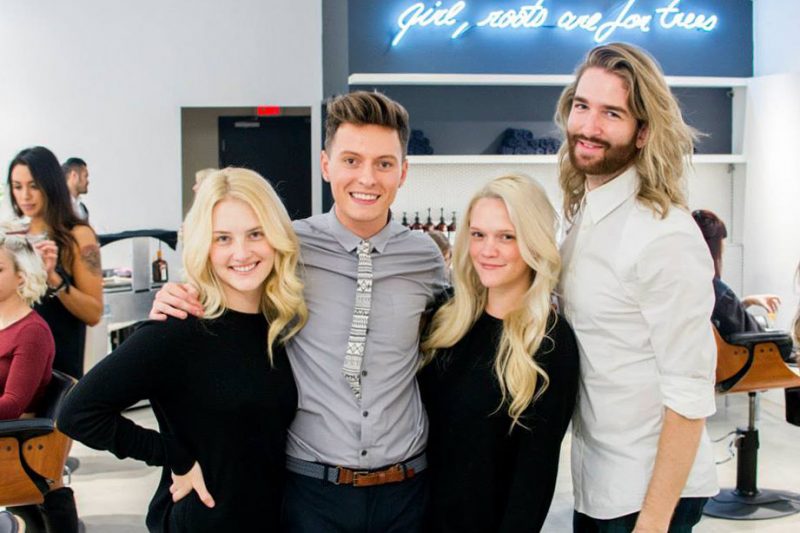 The partners, in both life and business, are well known and respected in the industry. Last year, BC Living named Gibson one of the top ten hairstylists to have on speed dial and Cass regularly tames the tresses of Vancouver celebs.

“The dream has always been to build our own business, and a future together,” notes Cass. “Hair is our mutual choice…so it’s an obvious one.”

As residents of Gastown, they were keen on finding a suitable space within its boundaries for their endeavor.

“We have watched it grow and are so proud of the revitalization that’s been taking place,” he explains. “We wanted to be a part of it.”

Through the construction phase and especially now that the doors are open, both Gibson and Cass were left speechless by the welcome they received from residents and business owners in the area. “It has been overwhelming and they’ve been incredibly supportive.” Once the name went up in lights, we’re pretty sure it had people saying – it’s so simple and perfect, why didn’t anyone come up with this before?

“We wanted something very androgynous, which was neither too masculine nor feminine,” he notes. “I thought of BRUSH, and Michael loved it right away.”

The clarity of their vision continued through from the name to the design of the space. With a big, open square to start off with, the inspiration came directly from the big apple.

“We both always want light and brightness, and we LOVE simplicity,” Cass explains. “We find salons in New York fit the mould perfectly, so we looked to them for inspiration.” Behind a wall of windows, the salon’s polished concrete floors give way to stylish seats and a lot of white. It’s clean, modern and inviting. And did we mention there’s neon? Located on the back wall of the salon, it’s easily seen from the sidewalk and brings more than a few smiles to the faces of those passing by. Done in Gibson’s own handwriting, it’s quickly become the salon’s signature – girl, roots are for trees.

“It was an idea Michael had, which took me a moment to warm up to,” Cass recalls. “Once you know him though, it’s easy to hear him say it – and now hard to imagine our space without a sassy line from him.”

The focus on hair (cuts, colours, extensions, etc.) and makeup will have guests perfectly primped for day, night and everything in between. The salon stocks products that were carefully selected, including L’Oreal, the Italian brand, Davines (known for sustainability and natural ingredients), and Shu Uemura, making BRUSH just one of a few salons in the city to stock the upmarket luxury line. As a Green Circle Salon, BRUSH is also putting their best foot forward when it comes to sustainable practices. They’re working hard to reduce their carbon footprint by recycling foils, plastics and even hair. Did you know that the few inches you cut off every couple months could be used to clean up oil spills? While BRUSH opened its doors in December, they celebrated their official grand opening at the end of January with a day of free blowouts, makeup touch-ups and gift bags. The event allowed them to meet and mingle with past clients and more than a few new names.

“The turnout was better than ever we envisioned,” Cass notes. “It really allowed us the opportunity to introduce ourselves, and our talented staff.” The team is starting to fill out nicely, as Cass and Gibson carefully select stylists who share the same vision and are experts in their craft. With eleven chairs on the floor, expect BRUSH to be bustling this summer. And if you’re thinking about a new do, we asked about trends for 2015…

“The sombre is taking over. I’m seeing a lot of honey tones and caramels. It’s the year of rich colours and long layers. If you ask Michael though, he’ll tell you that ice-y blondes are on the horizon.”