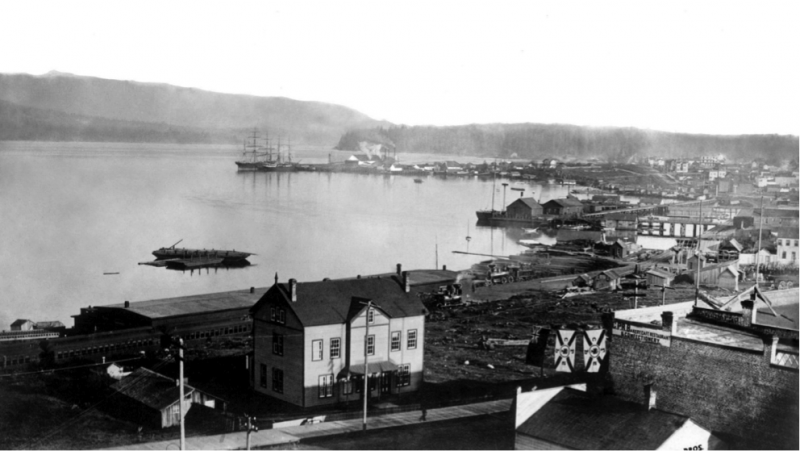 Great sailing ships at port, loading logs and timber while rough, sea-weathered crewmen unload fine teas, silks, and other desirable imports from the British Empire. Rough and tumble off-work loggers, fishermen, crews and captains find release from the burden of a hard life in hundreds of licensed local drinking establishments. The dock is shared with ferries from North and West Vancouver and with the Union Steamships carrying adventurous passengers into the beating heart of Gastown. Gastown continued to boom as a general centre of trade and commerce. Its infrastructure grew along with systems of rail, port and road.  As Gastown was situated on a natural harbour, the Canadian Pacific Railway chose the new site as their terminus. The CPR terminated on piles on the shore parallel to Water Street in 1886. In July of that year, Port Moody served as a temporary terminus for the first regular transcontinental train from Montreal and service to Vancouver itself began in May 1887. That year Vancouver’s population was 1,000, by 1891 it reached 14,000 and by 1901 it was 26,000. The population increased to 120,000 by 1911. The Port of Vancouver became internationally significant as a result of its key position in the All-Red Route, which spanned the global trade network of the British Empire, with the combined steamship and railway of the CPR shortening shipping times from the Orient to London drastically, with the new city becoming a node for major speculative investment by British and German capital.[7][8] After the completion of the Panama Canal, which although originally hurting Vancouver’s shipping traffic by becoming the new preferred route from Asia to Europe,[7] reduced freight rates in the 1920s, making it viable to ship even Europe-bound prairie grain west through Vancouver in addition to that already shipped to the Orient.

In 1955, an additional ship was added: the MV Princess of Vancouver – also a passenger

Today, Vancouver is seen as one of the most passenger friendly ports in North America.

Serviced by many of the world’s largest cruise lines including Celebrity Cruises, Disney Cruise Lines, Holland America Line, Norwegian Cruise Lines, Princess Cruises, Royal Caribbean International, Crystal Cruises, Oceania Cruises, Regent Seven Seas Cruises, Silversea Cruises and others. Gastown, is indeed the first port and call for visitors from all over. As soon as they step from their ship, they are within walking distance to the cultural epicenter of the city. Upon entering the neighbourhood, they find themselves truly immersed into the original Vancouver.