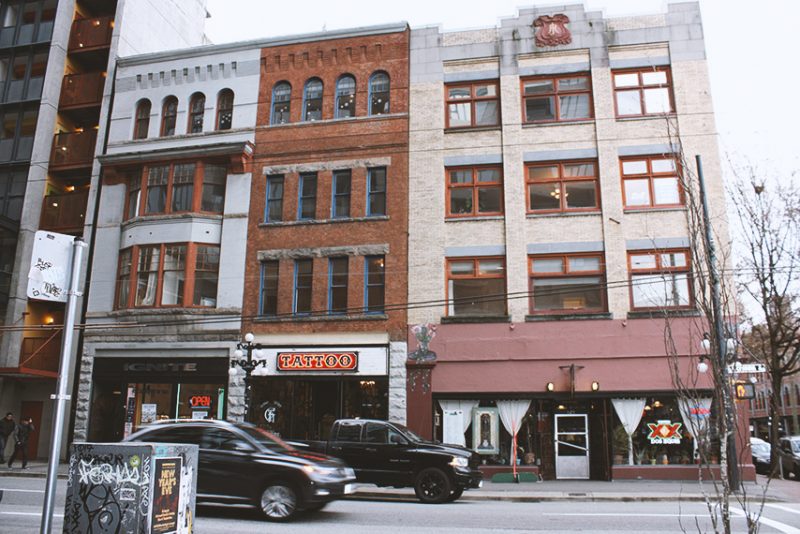 Sitting on the corner of Cordova and Abbott, the Runkle Block (cue to the obvious Californication reference) is a four-storey Edwardian era building faced with brick and concrete. Constructed in 1911, it was one of several buildings that formed the transition point between the Pacific shipping routs and the railway.

The Runkle Block was designed by Vancouver architects, Sharp and Thompson. Both were trained in London, coming to the west coast in 1908, and were among the few in the city with architectural credentials. A year after they commissioned the Runkle, Sharp and Thompson won the open competition to design the University of British Columbia. Warehouse operations were the primary use for the Runkle, but at times, the upper floors were used as hotel accommodation and lodging rooms. The overall design is boxy with a yellow brick main façade and decorative sills. Granite steps lead to the upper floors with inset black and white tile that is a common site in Gastown.

Next door, the Cook Block pre-dates the Runkle by almost two decades. Vancouver contractor, land-owner and developer, Edward Cook, was involved in it’s commissioning, which began in 1892 and continued through to 1909 as parts were added.

The Cook Block offers an eclectic mix of Italianate, Romanesque and Edwardian elements. Like the Runkle, it was originally built as a stopover point for the shipping of goods, but soon welcomed a very different crowd.

Vancouver’s first gourmet eatery, the Savoy, was located in the Cook Block. Guests would arrive in all their finery from the neighbouring theatre to enjoy some of the best food that money could buy. An early storefront on the eastern half of the building remains intact, with marble bulkheads, blue and white mosaic tile and copper sections, alongside an oak door (that now leads into the Gastown Tattoo Parlour). Inside, wooden floors and original room layouts provide a window to the buildings distinguished past.

Today, Smarty Pantz inhabits space in both buildings (with La Casita below). The adjoining walls between them were removed some time ago, opening the space up and allowing the escape room newcomer to create a space that honours the buildings history while making the best possible use of it’s haunted demeanor.