Gastown on the Small Screen – Gastown 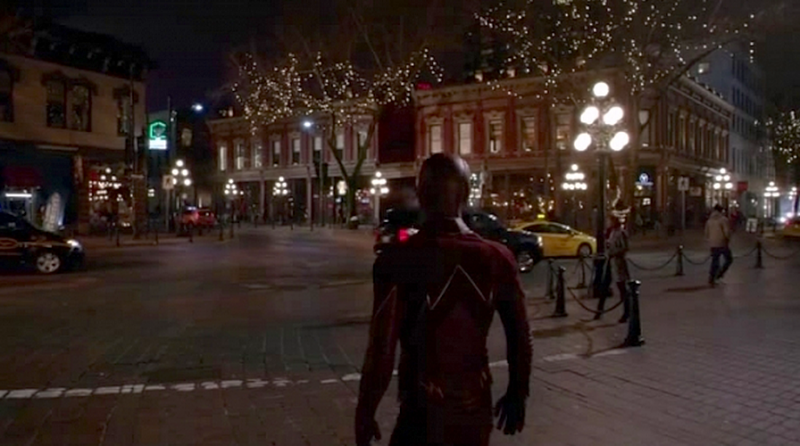 Faster than the speed of lightening, superhero Barry Allen aka ‘The Flash’ was seen fighting crime in his scarlet speedster suit just outside of Chill Winston.

The crew from the hit series came down during the wee hours of the night to capture the epic scene when the crimson superhero launches through a portal and travels back in time – suddenly coming to an abrupt halt on Alexander Street. We hear a few locals managed to snap selfies with the show’s leading star, Grant Justin.

We often come across tales of old phantoms lurking inside Gastown’s historic buildings…. perhaps a reason why TV series, Dead People, came down last March to shoot their pilot. The show (still in pre-production and yet to hit the small screen) centers around a rogue cab driver with knack for conversing with wandering spirits of the afterlife. During the shoot, leading star, Andrew J. West from The Walking Dead, was seen arguing with a “ghost” outside of Roden Gray and Coffeebar.

ONCE UPON A TIME

Fairytale characters step into the modern age in the series, Once Upon a Time. The CW show depicts whimsical storytelling in an alternate world using historic backdrops to heighten drama during pinnacle moments. Salmagundi West (located in flat-iron building, J.W. Horne Block) plays Boston in a scene that goes back in time to 1982, where the Snow Queen wanders around a gloomy neighbourhood and stumbles upon a psychic boutique. Look closely and you might catch a glimpse of the historic Juliet balcony (below), which sits at the point of J.W. Horne Block.

And this isn’t the first Gastown has seen the eccentric characters from Once Upon a Time. In 2013, the production crew brought in New York taxi cabs and setup SoHo banners down the block of Powell, transforming Gastown into the bustling streets of Manhattan. Historic architecture and dynamic streetscapes are among the many reasons why there’s been an influx of ‘Hollywood North’ activity in Gastown.

If you’d like to see which famous flicks were filmed in our neighbourhood, check out our post, Gastown on the Silver Screen.