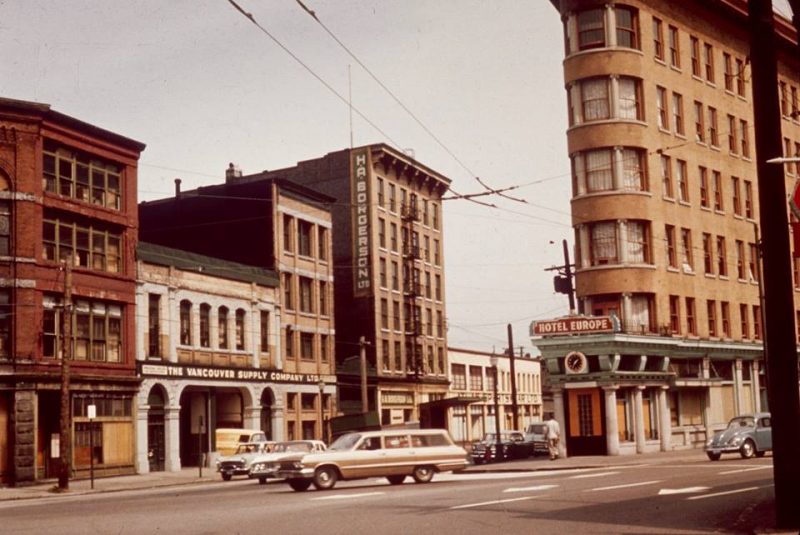 Established the same year Canada became a nation, Vancouver grew out of Gastown to become Canada’s third largest “city” and one of its most cosmopolitan. It all began one September day in 1867 when “Gassy Jack” Deighton stepped onto Gastown’s terrain with a barrel of whisky. Known for spinning tall tales and talking without end, he bribed millworkers with drinks in exchange for their help to build him a saloon. The saloon was up and running within a day…only a few steps away from the mill’s property line. And just like that, Gastown was born.

Gastown was officially incorporated as the City of Vancouver on April 6th, 1886. However, just weeks later on June 13th, a brush-clearing fire quickly spread and turned all but two of Vancouver’s 400 buildings to ashes. The city was rebuilt with Victorian architecture, cobblestone streets and modern electricity.

The Tremont Hotel (left) was destroyed in the Great Fire, but within days, a small wood structure bearing it’s name appeared on the site (center). Today, it’s the Abrahms Block  (right), a fine example of Victorian Italiante style and one of the oldest buildings in Vancouver still standing at its original location. It’s now home to the Salty Tongue and the Irish Heather.

In 1971, the provincial government declared Gastown as an historic area, protecting its heritage buildings and giving the neighbourhood a viable future. The neighbourhood is truly juxtaposition of old and new. In honour of Vancouver’s birthday on April 6th, here’s some history on a few of Gastown’s beautiful buildings, including who calls them home today… The Annex to the Europe Hotel was built by the prominent Canadian-Italian entrepreneur Angelo B. Calori. Completed in 1886, it is recognized as one of the earliest brick buildings to have been built after Vancouver’s Great Fire of 1886. The unique building is often photographed and compared to the Flatiron Building in New York (after which it was modelled). Today, it’s home to Fortknight Barbers, Spanish tapas spot – Salida 7, new kid on the block – Neighbour / Woman and Stussy.

Across the street from the Europe is the stately, Alexander. Thomas Dunn, a member of Vancouver’s first city council built this handsome structure to house his ship chandlery and hardware business. It is now home to Chill Winston and live music nightspot, Guilt & Company.

In 1925, the Lamplighter, which received Vancouver’s first pub license, took over the ground floor. The pub gained its name from John Clough, who was Vancouver’s one and only lamplighter. In 1887, John used to light the coal oil street lamps of Gastown, but in the same year the city introduced electric lights and John’s nightly patrols became a piece of history.

And did you know… The Lamplighter was the first establishment to serve unescorted ladies with ‘intoxicating refreshment’.

Once completed in 1887, the Springer-Van Bramer Block attracted retail and business occupants, as well as social groups, to the area. Retail was located on the first floor, offices on the second and meeting spaces up on the third. The building is also known as the Masonic Temple after the Masons and Odd Fellows made the top floor their home between 1888 and 1901. It has undergone few alterations since being built, except for the removal of its cornice due to safety concerns. You’ll find dutil., Bambo Café and Colourbox there today. This warehouse building, originally known as The Kelly Douglas Building, was built for a wholesale grocery firm founded in 1896 by Robert Kelly and Frank Douglas. Step through the doors today and you’re likely to come across reporters from The Metro, management of Vancouver’s own Whitecaps FC and dozens of entrepreneurs who share space in The Profile.

Gastown’s roots are authentically entrepreneurial. Since Gassy Jack opened the doors to the Globe over 140 years ago, it’s been a community of risk takers and passionate minds building businesses they love. Today, the neighbourhood retains its historic charm and independent spirit. And as the original Vancouver, there’s no mistaking Gastown for any other area, either here in BC or across the country.