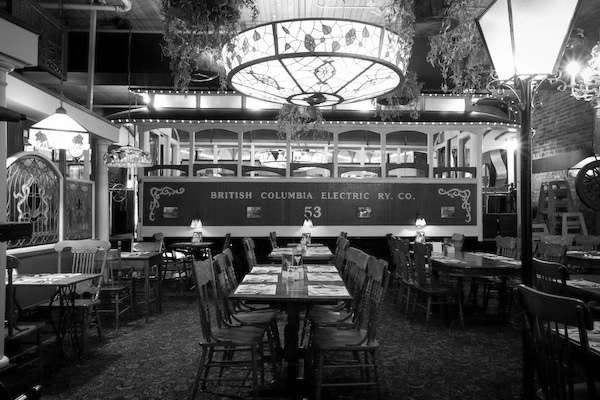 Congratulations on celebrating your 44th anniversary! That’s quite an accomplishment. What do you think is the key to your longevity?

We are proud to provide a unique dining experience when compared to other restaurants. It starts with our all-inclusive meals that come included with bread, soup/salad, coffee/tea and ice cream. We have always been proud of the prices that we provide for our guests, especially now in a tougher economy. There aren’t many places in Vancouver where you can feed an entire family, with freshly produced food, at such a reasonable price.

The most imperative reason behind our longevity is the significance we place in our guest’s feedback. The restaurant industry is extremely fickle and ensuring our customers happiness is paramount. We know that every single person who walks into our restaurant has hundreds of other dining options and it is our job to wow them. The adage we use in our restaurants is “The answer is yes, now what is your question.”

Can you tell us about the origins of The Old Spaghetti Factory, where did the concept originate?

The Old Spaghetti Factory is renowned for its antique furnishings & artifacts, which come from all over the world. What are some of the unique pieces found inside the Gastown location?

The most unique antique is definitely the trolley car that sits in the front of the restaurant. It was built by the BC Electric Railway Company in 1904. The trolley travelled between Main and Cambie until 1950 before being moved to the P.N.E grounds where it stayed for 20 years. Mr. Ernie Les Plant saved the car from destruction and later loaned it to The Old Spaghetti Factory where it has remained for the last 44 years.

There is also a piece of stained glass, which was originally from the Queens Carriage.

Tell us about the “lingering spirits” or ghosts that have been spotted inside Gastown’s Old Spaghetti Factory?

There are a ton of stories that have kicked out over the years from staff, managers and patrons. There are two characters that have been specifically referenced numerous times. One is a trolley conductor who hangs out in and around the train. The other is a young boy who is clad in clothing from the turn of the century. Apparently Water Front station used to be the main train hub in Vancouver and there was an accident that claimed some lives in the early 1900’s and that is thought to be the root of the lingering spirits.

The most recent incident was with a staff member who was closing down the back area of the restaurant at the end of the night. She saw a little boy run through the section and hide under a table. Thinking nothing of it, she went to speak with the boy and noticed that he was wearing very old clothing. She became unsettled and left to get a manager. The manager informed her that there was no families left in the restaurant and went back to look for the boy. He was no longer there.

The Old Spaghetti Factory is a very memorable place to take your family for a night out and for many locals it has become a family tradition.  Can you share a favorite memory or two from regulars?

The greatest stories are always from the people who grew up going to the Old Spaghetti Factory with their parents and are now returning with their own kids. You can see how excited the parents are when their child starts playing on the trolley just like they used to.

Do you have a favourite menu item?

Managers Favorite with Spicy Meat Sauce and Mizithra Cheese. It is one of the oldest and most basic dishes on our menu but the Mizithra cheese is such a distinctive flavor. There was a period of time where you could not find Mizithra cheese anywhere in Vancouver except at The Old Spaghetti Factory. It has become more readily available and we like to pretend that we have had an influence.

What has changed over the years?

The menu has changed drastically. We started as a scoop and serve concept over 40 years ago. The competition has raised the bar with respects to options and taste profiles and we have done the same. We still offer some of the classic sauces that were on the menu when the doors opened but most of the menu and recipes have been further developed to ensure that we are not becoming stagnant.

That and our staff members no longer wear bow ties.