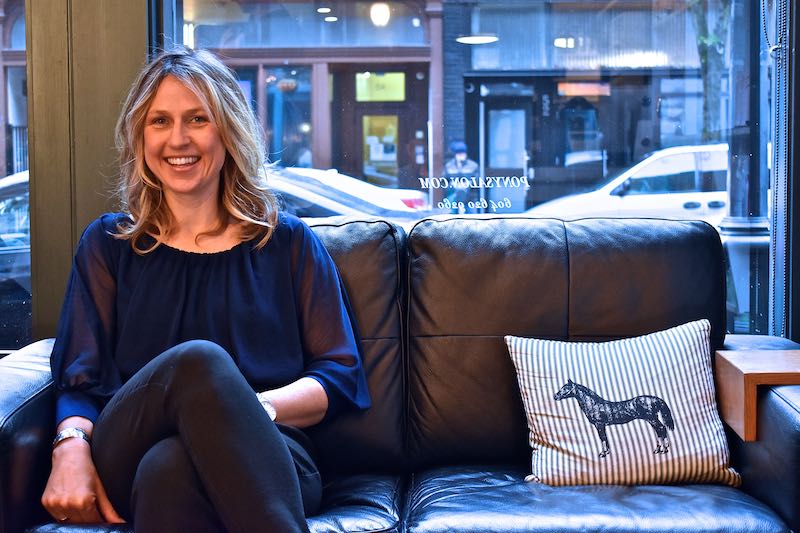 What do you and how did you get here?

I own a hair salon in Gastown and I do hair. How I got here was that in order to put myself through law school,  I found a job styling hair. I wrote my LSAT and despite doing really well, decided that a law career wasn’t for me, so I opened Pony salon here on Cordova Street in 2012.

How did the name ‘Pony’ happen?

The name wouldn’t get out of my head. I was obsessed with it. People tried to convince me of all sorts of other, better, and more appropriate names for a hair salon. Even my Swedish boyfriend strongly believed the salon should have been called ‘Volume’ with a ‘y”. Don’t ask me where the ‘y’ goes. There were plenty of punny names suggested like Kristy’s Sheer Shack, but Pony was always the winner. It’s androgynous, easy to say, and to remember, and Pony could refer to a ponytail or a prancing pony. What’s not to like about it?

What do you love about working in Gastown?

There are amazing people in Gastown. There are many great people who work here, and the residents are what make this neighbourhood shine. I love the old buildings, the cobblestones, the nice lights, and the parking down here is fairly cheap.

If you had 15 minutes only in Gastown – how would you spend it?

Can I have multiple 15 minutes or just one share of 15 minutes? If it were literally only 15 minutes, then I would go to DiBeppe for coffee and get pizza at Nicli Pizzeria.

Can you recall a moment in Gastown that stands out?

Yes, and there are many. This one time, back when it was only myself, Chris, and a girl helping at the front desk, a wonderful local resident came into the salon wearing a do-rag, claiming he was the brother of the supermodel Iman. He did a sexy catwalk in front of the mirror, telling us that he wanted to shake up his look. Both Chris and myself thought it out for a minute but had no idea how to deal with the guys receding hairline. After a minute, he left, and we both just stood there in awkward silence.

Then there was this other time, just recently, when Lindsay went to London Drugs to get some supplies. Walking back to the salon, she found herself loaded down with heavy things like laundry detergent and bottles. Somebody had left a shopping cart out on West Cordova, and Lindsay seized the opportunity, making her shopping journey back to the salon, a whole lot easier. After she delivered everything, she made sure to put the cart back where she found it.

Lots of forest bathing. Drink plenty of water. Sleep a lot and surround yourself with good people.