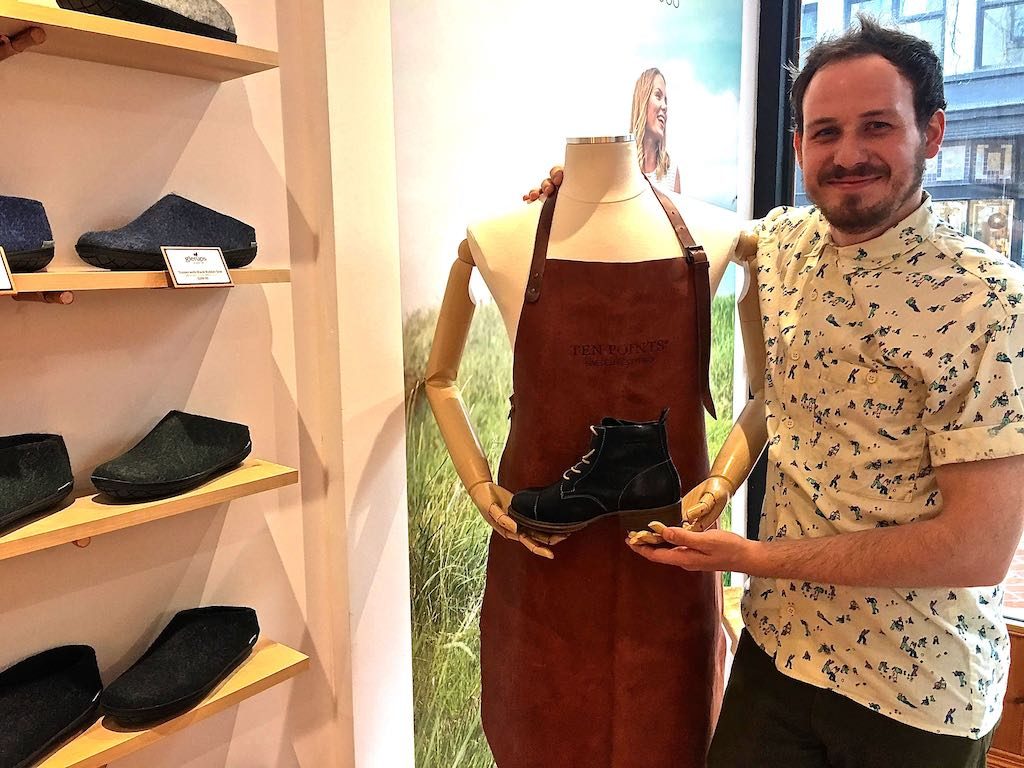 I’ve been with the Australian Boot Company for 5 years as their Western Canada general manager. In the fall of 2014, I left my home in Manitoba to live in Vancouver. I grew up working in my parent’s convenience store back in Brandon. Naturally, a retail environment felt comfortable and I went out in search of finding a solid company to work for. It took a while. In the meantime, I worked at the Commodore Ballroom and that’s where I met this great Australian dude named Brett – at the time, the manager of the Australian Boot Company shop in Kits. I soon became an assistant manager at that store. We outgrew that space and the time had come to either expand the Kits shop or open up a second location. I went out looking at new spaces with the owners of the company. We went all over the city including Commercial Drive, Main Street, and Yaletown. All great places for a shop but what we were really looking for was that genuine community feeling, and we definitely found it here in Gastown. We’ve been on Water Street now since November 2017 and It’s a fantastic place to be.

Working in Gastown is a real pleasure. There’s culture here and it’s a place that keeps growing and changing. There is an immense amount of history and important Vancouver heritage that can still be experienced first hand. I like the dichotomy of old and new – how these two differentials co-exist, respecting the origins of Gastown while taking risks to create something new. I also love being part of a community in Gastown – the funk nights at Guilt & Co, hanging out with friends at coffee shops, or just seeing my neighbours on the street. It’s hard to find that connection in Vancouver.

If you had 15 minutes only in Gastown – how would you spend the time?

I’d be heading down to Birds & Beets, or Revolver and getting a nice hot cup of coffee.  I love the arts and I love coffee. Some of the neighbourhood coffee shops are going beyond the norm, hosting wine and cider pop-ups, Dj’s, art shows and other cool events. I see this happening a lot in Gastown, which is really awesome.

Can you recall a particularly happy moment here in Gastown?

When we first opened in Gastown, it was pretty intimidating. Coming from Kitsilano, West 4th has a totally different vibe from Water Street. It didn’t take long to feel part of. Adi Berttachi from the Italian hat shop (Capelleria Berttachi on Abbott), came into the shop. I remember him being super warm and welcoming, and he really made me feel like I belonged. We still visit each other often. Shortly after, Maxine from Lemongrass House came to say hello and she too welcomed us to the neighbourhood!

Live happy. Don’t take things too seriously. Respect everyone you meet and you’ll be surprised at the outcome.