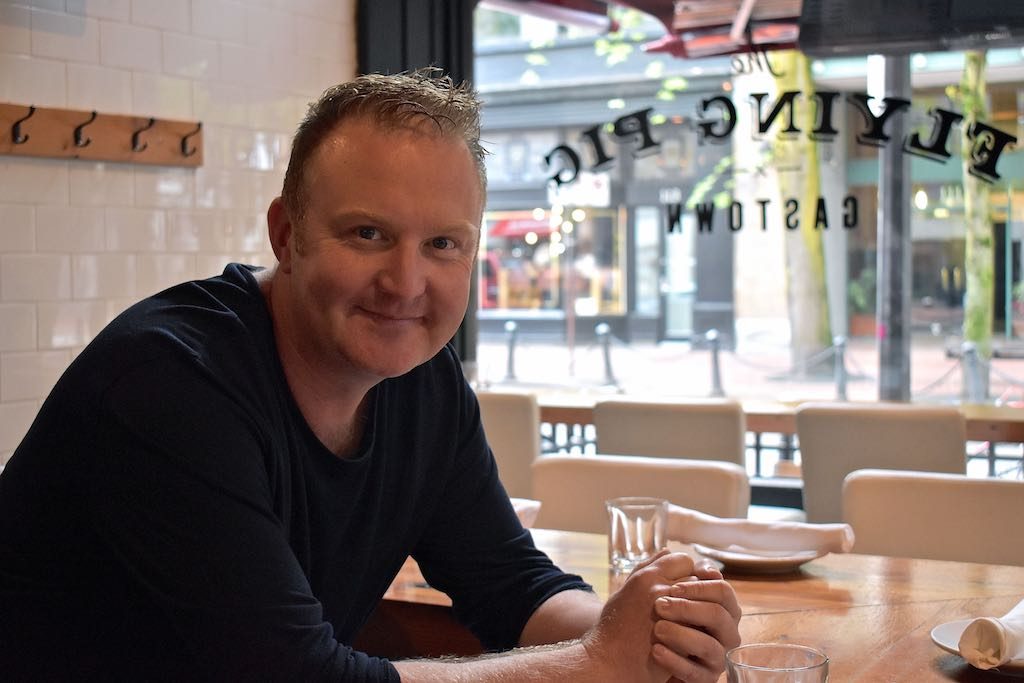 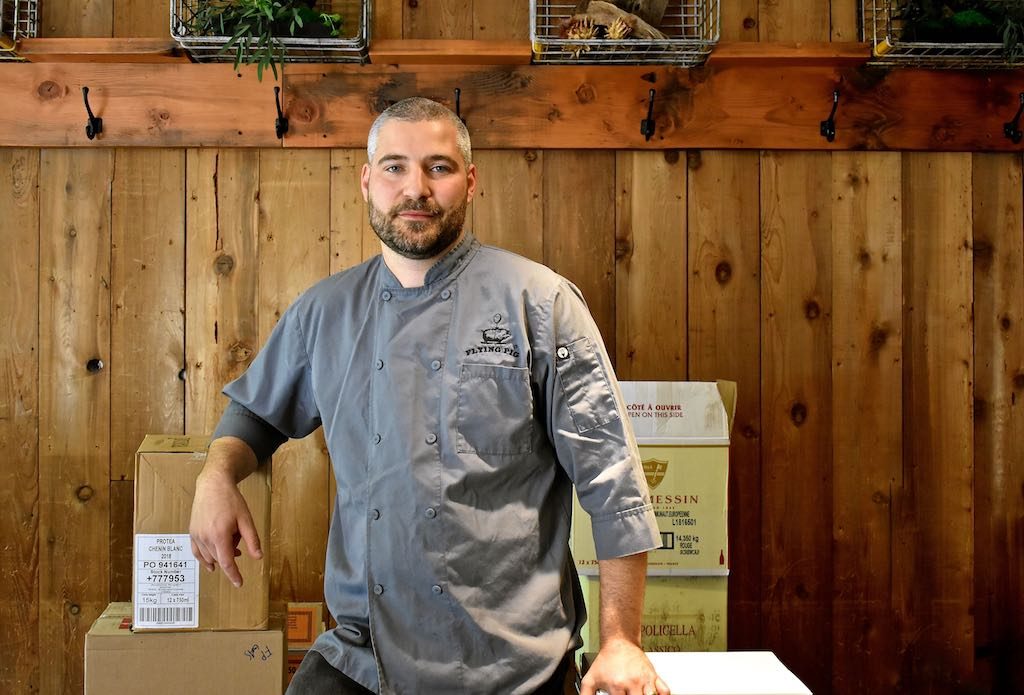 Erik: We’re both chefs. I’ve been working in kitchens since I graduated high school, starting as a dishwasher and working my way up. A few years ago I teamed up with my longtime workmate John, and we realized our shared dream of opening our own restaurant. But lets fast forward a bit. 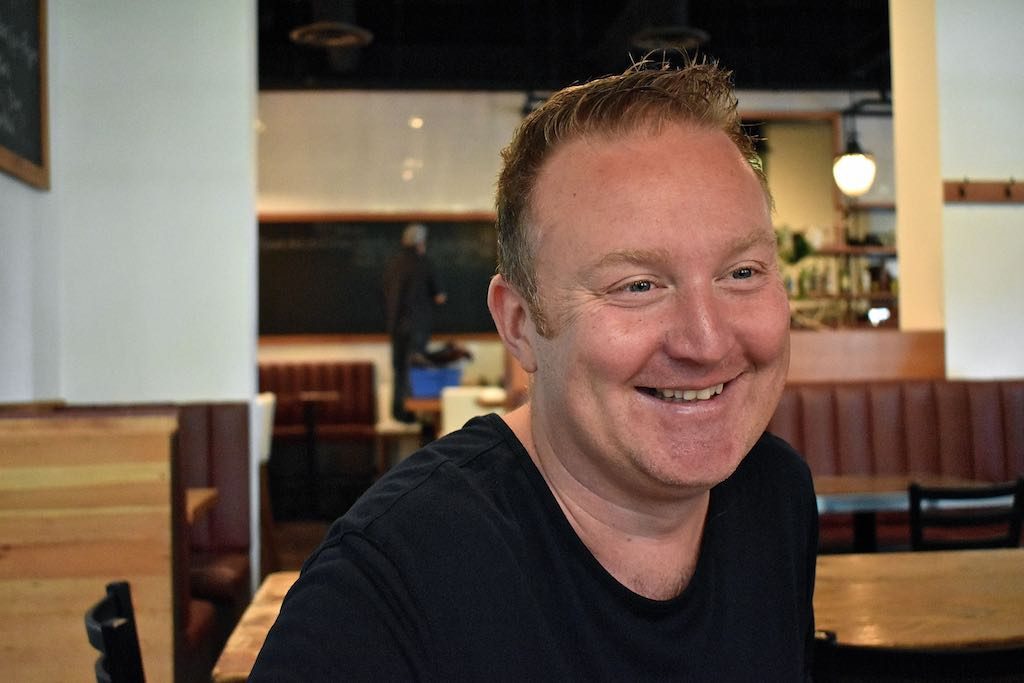 John: Actually, more of a rewind is necessary, as you Erik used to be my Sous Chef for a few years. Oh, and I used to yell at you all the time. 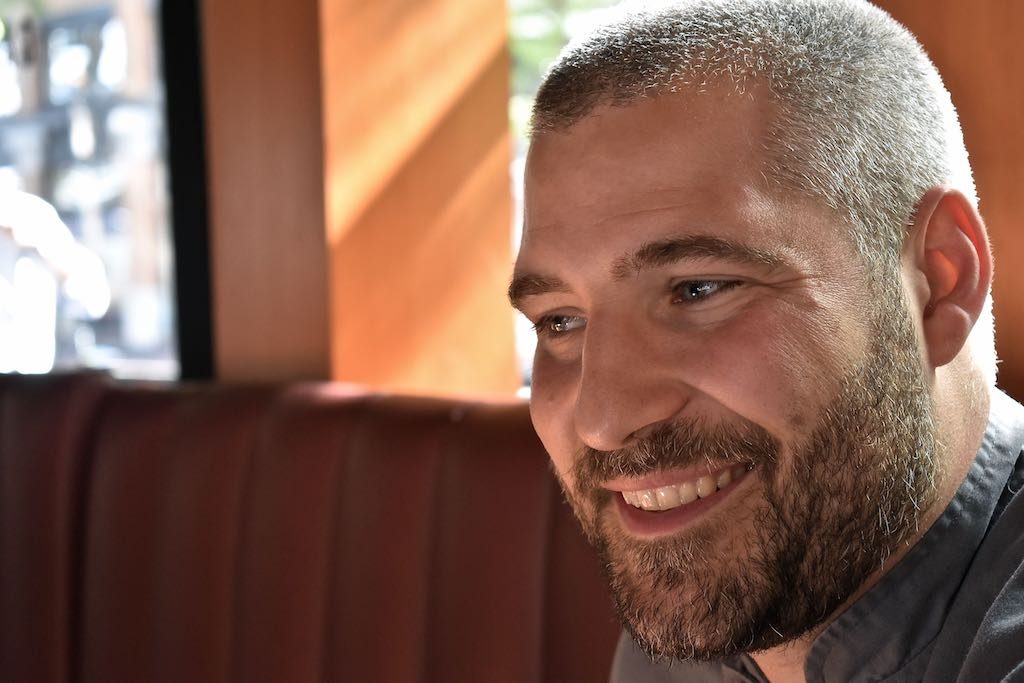 Eric: It was actually for 5 years John but it felt more like 10.

John: We met about 15 years ago at Joe Fortes, and I was the Chef de Cuisine, while Erik was Chef de Partie. After Joe Fortes, I worked for Emad Yacoub, owner of the Glowbal Group of restaurants. I suppose I became a mentor for Erik as he later joined me at Glowbal, and we became best friends and allies.

When did you open your first restaurant?

Erik: It was The Flying Pig Yaletown in July 2011 and we talked about it seriously happening for about 3 years before. Once we committed to the idea, we found that as total newbies in owning and running our own restaurant, and despite our solid track records in the industry, not many property owners wanted to lease us a space. It can be soul breaking, looking at suitable places and being turned down because owners want to gamble on a sure thing.

So experience only gets you halfway in the game?

John: Landlords typically want to deal with somebody who has an existing restaurant. It’s a big risk for them also. The space housing The Flying Pig Yaletown had been received by a bailiff before we got it, and everybody said don’t do it there, it will never work. The thing is; we’re like broken angels who root for the underdog and have faith in the glistening potential of the diamond in the rough. I remember looking at another location in Gastown and as I was walking down Water Street, I saw the Winters Hotel location (our current space), and felt in love with it. I went in to check it out. It was a taco/Mexican food spot that was quite empty. I discovered that the space had changed hands almost every year for the past 5 years, with each restaurant basically failing. The current tenants weren’t interested in moving out but I left my card, hoped for the best, and walked away. A month later I received a call from them, and within two months we sealed the deal and had moved in. It was early February when we started construction, and we officially opened The Flying Pig Gastown that April. It was the quickest turnaround I’ve ever experienced, and it had to be, as we wanted it really badly.

John: We took old photos of the original space  – it was known as The Winters Hotel (c.1890’s), with the lobby and saloon located on street level. We placed the bar in the exact same spot as where it once stood.

Erik: I’m glad we did. When you walk into the space, it makes sense why the bar is where it is.

John: We’ve always been big on using reclaimed materials and repurposed items in the construction and design of our restaurants. We’re willing to pay a bit extra to pull those 100 year old beams of wood out of a salvage yard and build tables, bars and other bits of furniture with character.

Erik: Our tables and bar are made from reclaimed wood that was once part of the ceiling structure of The Terry Fox School. 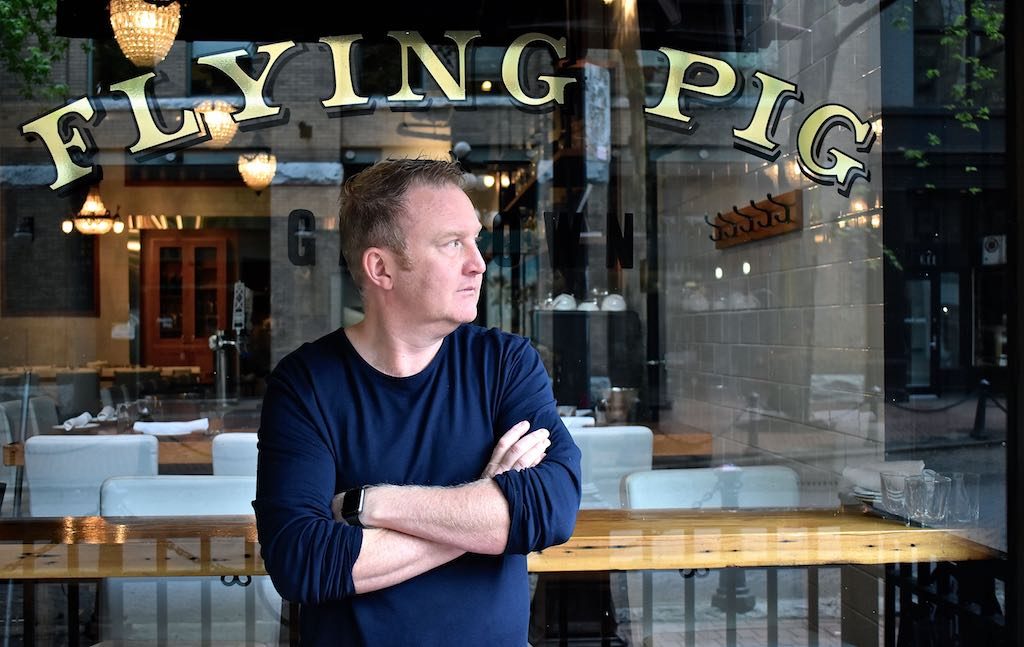 That fits as you both talked about seeing potential in things that are cracked and sometimes lackluster. Gastown is a bit like that isn’t it? You’re like the other pioneers and visionaries that believe in this neighbourhood.

John: You don’t go into a community and say: I’m only going to take the best parts. You need to take every part, the good and the bad, and help that community to become better. This place had seen 5 different restaurants come and go in 5 years, and it makes you question what’s wrong here? But so far, we have flourished and we continue to grow in Gastown.

Erik: It definitely takes luck, hard work, commitment, and a willingness to become part of the neighbourhood and community. It’s the only way to survive and thrive.

The Flying Pig Gastown is at any given time, busy and full of people. What’s your secret?

John: Right out of the gate, we weren’t all that busy. There are plenty of great options in Gastown when it comes to dining. Without faltering, we have stuck to what we do best: focusing on quality food, served well and plated with consistency. You can add good value for money to our philosophy as well.

Erik: Lots of my customers tell me: Buddy! You’re my go to. The Pig can secluded and intimate, or upbeat and vibrant. They get consistency across the board without having to pay through the nose for it. 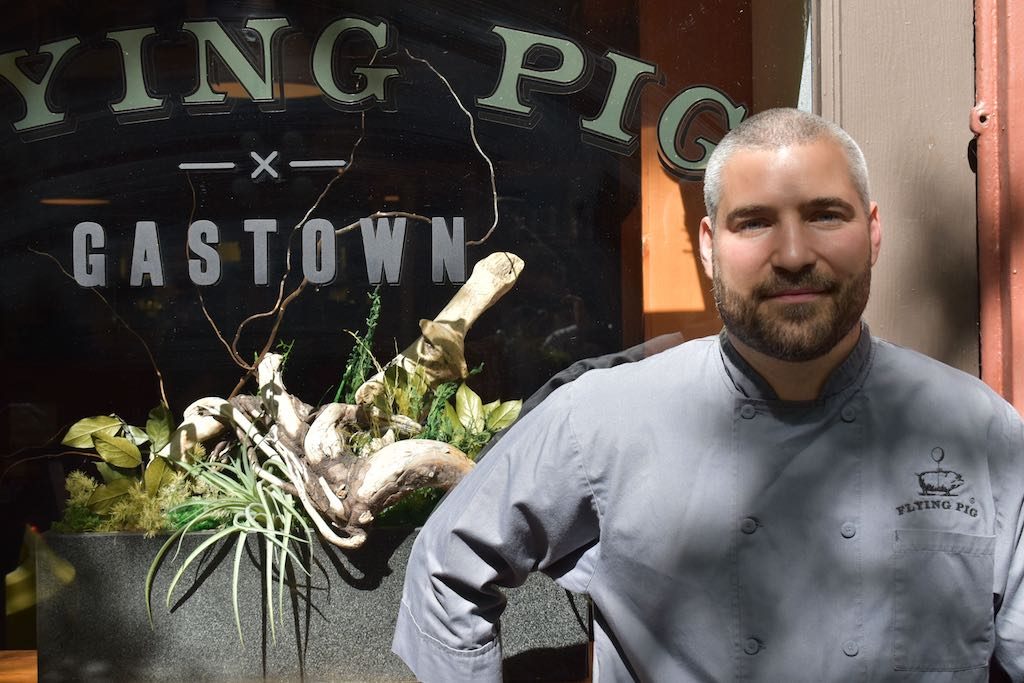 What do you love about Gastown?

Erik: I used to live in Gastown prior to opening up our restaurant here, and Gastown is a special place. I don’t think there’s anywhere else in Vancouver where you’ll find such a diverse mix of people as you find in this neighbourhood. You get once slice of everything there and where else in the city can you find this? You walk down any street in Gastown and you will  find every different type of person. How awesome is that?

John: I remember being 17 years old and sneaking into The Town Pump to party and see live music shows. Gastown is where you went. It was the cool place to go and I always had lots of fun here. I still do.

What are some your favourite places in Gastown to eat and drink in?

John: Myself and Eric often go to L’abattoir, Rodney’s, Water Street Café, and the Lamplighter (for drinks with the guys). Years ago, we had my birthday dinner at Jules.

Erik: We literally just had lunch before this at The Greek Gastown. We know all the guys there. It’s hard to say what’s my favourite as there are a ton of great places to eat in.