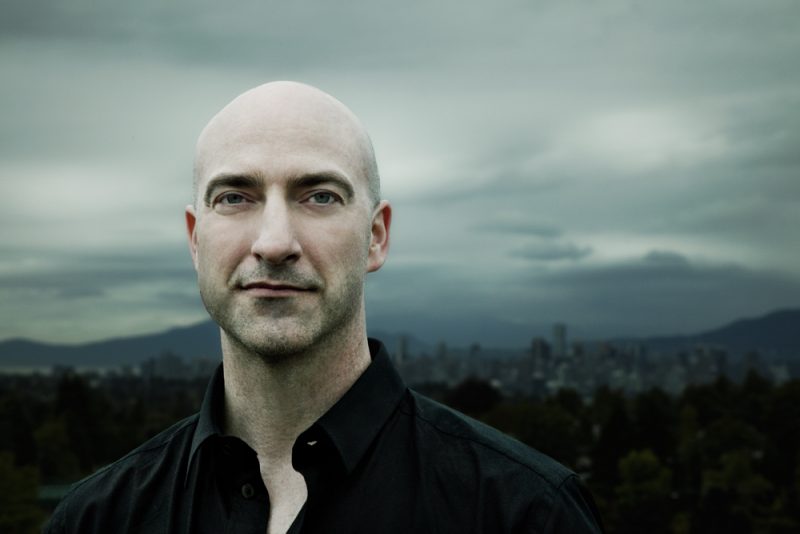 His Lego lives there too, transformed from plastic bricks and parts into realistic places that many of us know well. He is interesting to say the least, having as a child, visited his uncle in the Woodward’s Store, picking up the Sunday pot roast with his mother from Save-On-Meats, spiking up his mohawk as a teenage punk and finding his true self. Later and later still, adding, fine tuning and expanding his Japanese body suit of intricate tattoos and founding a thriving brand strategy and communications agency in Gastown – The Notice Group. Mentor to the young creative, visionary to the unformed, innovator of the possible and great builder of the Lego microcosm – we sit for awhile with Johnathon Strebly and he allows us to peer into his magical universe.

How did you get into building detailed Lego structures?

I built the Pacific Central station on a whim during the holidays. Bored and just sitting on the couch, I decided to return back to something which was an escape for me, as I live a very digital life; to enter into an analogue environment and some distraction from what I do everyday. So I started Google-ing Vancouver landmarks and adding the word Lego to see what came up. City Hall has been done, Waterfront Station – done, Harbour Centre as well. I entered Pacific Central station and nothing came up. So I set out to make something small and it turned into a much larger model than I’d expected. 3 days later, I have this big train station model in my living room and my wife is like “Where the hell did that come from”. I used parts I had at home and then posted it on Facebook and a friend of a friend, who is a columnist at the Province newspaper picked it up and then it snowballed to CBC, CTV and a number of other media outlets. As a result, I was commissioned by a local Gastown company to create a piece for them.

What else have you made?

The Edward Hotel was the only building in Gastown that survived the Great Fire. There were people inside, throwing mattresses out the window and dowsing everything they could. It’s one of the earliest buildings of its day. This model build is old and new. I’ve kept one side of the building open so you can actually see into the old hotel on the top floors and the modern Water Street Café on the lower floor.

There are so many landmarks in Gastown to inspire and there are some fantastic historical references here in the preserved buildings. I hope to do all of Gastown, primarily all of it’s oldest buildings; not sure where I’ll find the time or patience. From my window, I can see a lot of rooftops on Water Street and the surrounding area, including the Edward Hotel, which I replicated as closely as possible. So you have other Gastown buildings that are under construction?

Absolutely. I’ve started sections of Blood Alley, Maple Tree Square with Gassy Jack and the Alhambra Building with its connection to the butchers in the Alley at the time and the jail. Growing up, I remember the Shebeen and The Irish Heather before they moved to Carrall so there’s a lot of storied history, which is personal to me, growing up in Vancouver and coming to Gastown. I also want to eventually build the Waterfront Station.

How long have you lived and worked in Gastown. What do you love about the neighbourhood, lifestyle and culture?

My studio has been based in Gastown for the last 4 years and during that period I’ve lived here in the Woodward’s building. To me, unequivocally, Gastown is the only true neighborhood in the city. The reason I say that is because there is so much conversation and convoluted perspective on the haves and the have-nots; who belongs here and who doesn’t and the idea of gentrification and progress. When you look at a structure with historical value that needs to be saved and something historical that needs to be replaced; that conversation has been going on since Vancouver began.

If you look where the Gassy Jack statue stands; where John Deighton proclaimed, probably after many beers at the Globe Saloon, “This is the township!”  that’s where it all began. We have to remember, that at the time, there was nothing else – pioneers, innovators, startups, “tech” for that era, were all coming here and there was a confluence of innovation and creativity. Whether it was the aristocracy, the hotel owners, the mill workers, the services of restaurants, prostitutes and others. – butcher, baker, candle stick maker, provider, supplier, purveyor and innovator and money sources – it all began here. And not a lot has really changed since its inception. There’s still every aspect of life and every walk of life in Gastown.  When people ask me – ‘How can you live there?’ with it’s issues and the like and I look at other areas and say to those who live there – ‘How can you not live in an environment which is constantly challenging itself and readdressing what it should be?’ For myself, as a creative, every project that is done, is done –  it’s over. I live for the moment of process and often I’m asked the question: ‘What’s next?’ and though I’m always trying to accomplish what’s next, I try to not repeat the mistakes of the past. I think Gastown has done a pretty good job of that.