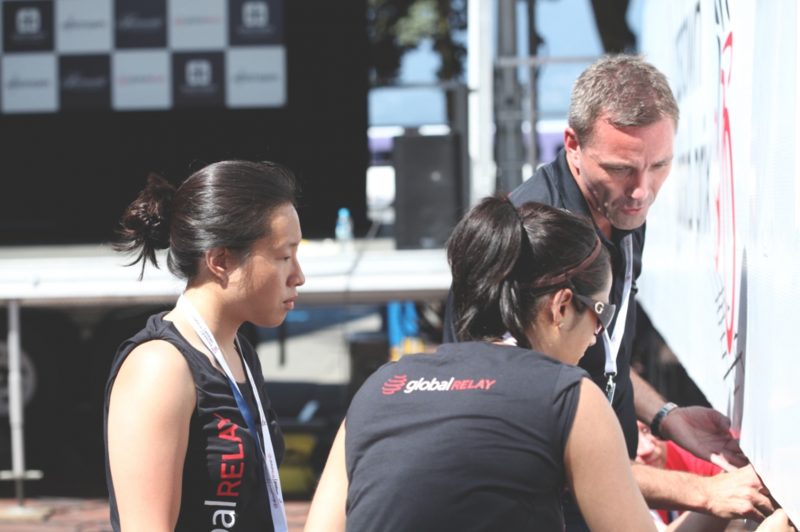 In 2012, Global Relay stepped forward as title sponsor for the Gastown Grand Prix, returning the storied race to glory after a three-year hiatus.

What inspired you to bring the GGP back after several years off the circuit?

Gastown has been Global Relay’s home since the beginning, and we are always looking for ways to enrich the community and have a positive impact. The opportunity to revive the Grand Prix came at the perfect time, and just seemed like the best imaginable way to give back to the neighbourhood. The fact that so many of our staff are passionate about cycling made us doubly sure that this was a great initiative to take on. Almost all of our employees are involved with the Grand Prix in some way, so running the event has had an incredible effect on our sense of camaraderie around the office. Global Relay staff on course during the event

What was it like to watch the racers hit the street in that first year?

It was a very proud feeling. As an entrepreneur, you work so hard for so long before you get to see your ideas come to fruition. Watching the 2012 Grand Prix become a reality had that same deeply rewarding feeling.

It was a very close finish that year. Were you watching from the office rooftop (which has one of the best views on course) or at the line?

I have been at the finish line every year – the energy is just incredible and I wouldn’t miss it for anything.

In the three years since, there’s been tremendous growth and change for both Global Relay and the GGP. Global Relay has grown a great deal in the last three years, so we’ve been able to put increased resources, publicity and personnel into the race as it has grown from year to year. One key change has been increasing the prize purse – most significantly raising the women’s prizes to equal the men’s – splitting a $50,000 purse. We now have the largest cash prizes of any women’s criterium in North America. This year, we’ve also added a youth race for boys and girls. The kids will get to kick off the event by racing on the same course as the pros will ride on just a few hours later. It should be really exciting for them, and I expect we’ll see lots of those same athletes again in the main race in a few years’ time.

The youth race is being made possible by Global Relay’s Bridge the Gap Fund, a development program for young cyclists in Canada. The fund was created in the wake of the 2012 GGP when Roy asked racers if there was anything else the company could do. Their answer – find a way to support up and coming riders.

What can you tell us about Bridge the Gap?

We’ve committed $400,000 to the program, which is run in partnership with five of Canada’s top professional cyclists. It’s such a hard transition from amateur to professional cycling, so we established the Bridge the Gap Fund to provide support – both financial and in mentorship – to a group of more than 20 cyclists. We want to create the next Canadian cycling legends and that requires financial resources, elite coaching and the necessary equipment. With the Bridge the Gap Fund, we can help these exceptional young athletes reach their full potential.

The 2015 GGP is less than a week away and spectators are already scoping out spots to watch this year’s field battle it out on the cobblestones.

Who should spectators be watching for at this year’s event?

There’s an exciting sense this year that it’s anyone’s race to win. Some of the usual favourites won’t be in the field this year – such as two-time defending champion Leah Kirchmann – so there’s a great opportunity for some underdogs to make a play for the podium. I think we’ll see great performances from some unexpected teams and riders. Competitors race along Water Street in 2014

This year’s race will be extra special as Global Relay celebrates 10 years in the neighbourhood.

Our goal has always been to create jobs in Canada, and Vancouver specifically. Our beautiful location in Gastown helps us attract employees and keep our current ones happy. It’s easy to get excited about coming to Gastown every day to go to work. Our involvement with the Grand Prix has really reinforced that connection we feel to the neighbourhood. We’ve been extremely lucky with the building that we found back in 2005. We’ve expanded over 10 times throughout the years, and the building owner has worked to accommodate us each time, so we’ve never had to consider moving. We’ve been able to grow to the point that we now have the largest office lease in Gastown – all without having to leave our original home.

The Gastown Grand Prix takes place on Wednesday, July 15th, starting at 5:30pm with the Youth Race. For the schedule and race route, click here.