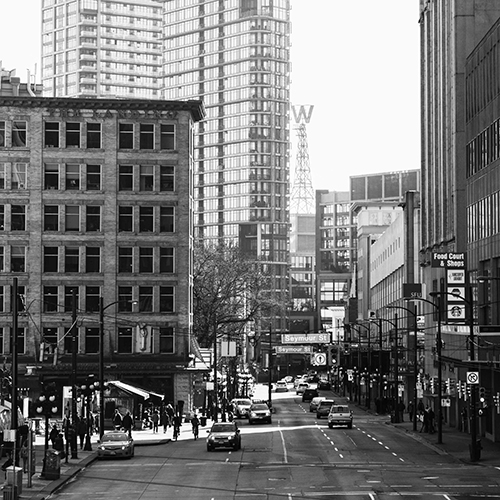 Don’t get me wrong; I’m not just picking people to interview at random. Almost always, I’ll initially track somebody down because they’re doing something interesting in Gastown.

Enter Nelson Mouëllic, who did the photography on our new Gastown street banners.

I originally got a hold of Nelson thinking we’d chat about the banners, but we ended talking about just about everything else. Primarily, just how one makes a living as a professional photographer.

As it turns out, it’s circumstance, talent and a hell of a lot of hard work. Where does photography start in your life?

My mom was a photographer for the Toronto Sun, briefly. Then she moved out here and was working at a photo-lab when she got pregnant with me and had to quit. But she always had a camera in front of me at a young age. If you look through my baby photos, I’m like four-years-old holding my Fischer Price camera, shooting my fourth birthday. I just always had a camera.

My mom wouldn’t let me use her gear, ever. So when I was 12, she took me to this guy who she knew sold old film cameras and I bought my first camera, an old Cannon. I moved to London, England when I was 20 with that same camera.

Everything after that… photography was just the goal. So that’s the moment where everything irises in?

Yeah I think so. I think with most artists, you know you want to do it. But you sort of need somebody to tell you, “Yeah, you’re good enough. Do it.” Most artists, they’re always doubting themselves.

As well you kind of should, because the fine line between being an artist and being a sociopath is a little bit of self-doubt, right?

Yeah, you’ve got to keep your ego in check. But you still need that push from somebody who isn’t your mom telling you, “you’re talented!”

Validation from your peers.

Exactly. So, yeah, that was sort of it. But basically after that it was just hustle, hustle, hustle to make enough money to support yourself as a freelancer in Vancouver.  And then networking. So you’ve been doing this professionally for about 10 years?

As my sole source of income? I would say closer to three. I’m still pretty fresh. But it’s been three years of just full time photography and then another, say, three years before that of trying to make it full time, while working other jobs. So it’s closer to six or maybe a little longer. It’s also tough, having what you want to do not be your main source of income. People always ask, “Oh what do you do?” and you have to reply like, “Well I’m a photographer, but I make my money waiting tables.” It’s a bit of an internal struggle.

Yeah I get lucky as a writer because it can be such a blanket term. But photography is kind of tough because you have to be doing exactly that.

Right, because even when people ask, “well, who do you shoot for?” you have to say, “Well… my friend’s band…” So yeah, it’s taken a while to get here.

If you weren’t doing this what do you think you’d be doing?

Trying to do this. That’s a cool thing, man. I’ve been talking to other artists, and everybody seems to say the same thing, that you should only do that thing if you can’t not do it.

Part of it is, also, you’ve got to be a bit of a businessperson. If you want to succeed creatively, you’ve got to treat it like a business. You can’t just treat it like this fun thing and put pictures up on Instagram or Flickr of whatever. You’ve got to make money at this. Part of that requires you saying, “There is no Plan B, this is what I’m going to do. Failure isn’t option.” Just because it’s so easy to fail. If you have a Plan B, you’re going to fall back on it right away.