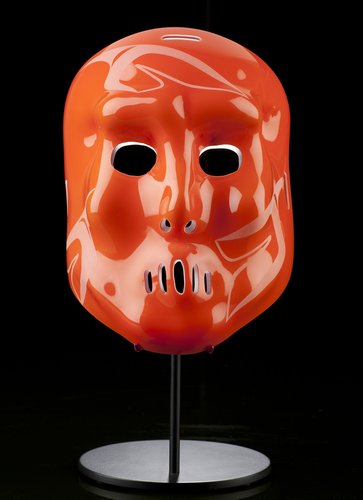 Art can be about burning bridges. It can be a direct retaliation against conventional thought and popular culture. It can try to scare you.

But there is art that serves an entirely different purpose. Preservation. It’s art that is about reuniting us. It’s about remembering what has come before and recording it for future generations.

Joe David definitely falls into the latter category. But that doesn’t mean his work is any less beautiful… or terrifying. This particular collection has been some 20 years in the making, but David has been creating art and being influenced by first nation cultures his entire life.

David was born in Opisaht village on the western shore of Vancouver Island in 1946, and observed continuing traditional ceremonies as a child.

After developing a mastery of the carving styles of Northwest Coast nations, David’s influences started to become a little more, well, mythical.

David became deeply influenced by the shamanic practices of the Northwest Coast, as well as other world cultures that he experienced during his nomadic lifestyle around the world.

He’s participated in the annual Lakota Sun Dance in Arizona, and he’s worked with prominent Maori artists in New Zealand. But perhaps most notably, in 1984, he carved HAA-HOO-ILTH-QUIN (Cedar man) during the protest to protect Meares Island from logging.

Cedar Man was erected in front of the Provincial Legislative Building in Victoria, and is now in the collection of the University of British Columbia Museum of Anthropology.

You can also see David’s work at the Vancouver International Airport, the Tin Wis Lodge in Tofino, and Teleglobe Canada.

So, suffice to say, Joe David is not only a Vancouver icon, but perhaps one of the greatest first nation contemporary artists of all time.

This particular collection at Spirit Wrestler heavily features the striking Nuu-chah-nulth style masks, but it also highlights some of David’s more contemporary explorations in bronze and glass, as well as several drawings and paintings.