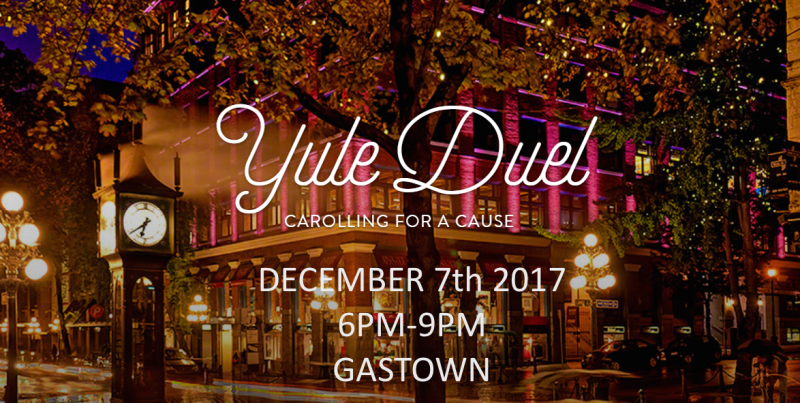 My love for choral singing was kind of accidental. I was in the CapU music program for piano back in 2000, and part of the program requirement was to be in one of the ensembles. After my audition, I was surprised to discover I made it into their select Choir – Cap Singers where I met Maggie and Troy…and thus began my long love for choir & a cappella and a long-term friendship and musical partnership with two of our band’s members. “Quayside” resonated with us because it’s home. I live off of Quayside in New West and I also grew up in North Van where Lonsdale Quay is kind of a landmark. In terms of naming the vocal band, I knew it was a unique name that I figured was catchy. Our nickname amongst ourselves and some of the community is Q5, which works since we’re a quintet!

There are a few things that really attracted us to Yule Duel. Fundraising for May’s Place is a very worthy organization and cause. Our singer Alyssa is a nurse and she see’s firsthand the need for places like this, and the tremendous impact it can have on a family. Being able to network with other choirs…all in one night…is fantastic. And lastly, it’s the ability to share our love for music with our own twist to the songs; that is something Q5 is really excited to share with everyone at Yule Duel.

We’re an A cappella Pop squad! Year-round you’ll find Q5 making arrangements of our favourite songs, and if it has the right beat…adding some movement/choreo to it. During the holidays, we try to modernize our favourite tunes so that they catch the ear of any Christmas music lover (check out our instagram!).

It’s hard to say! Looking at the list, we can see there is some stiff competition! This said, we’ve been rehearsing a lot lately so we hope that wherever we are on the scale…that the odds are more in our favour because of how much we’re practicing.

We think so! You’ll have to see and judge for yourself. We’re pretty lucky to have Justin in our group (aka JPham), who brings his wicked beatboxing skills to our performances. Being the youngest of the group by 10 years, it allows our arrangements to balance today’s new music with some classic stylings.

Being in the local scene, the group we see advertised a lot is Sweet Scarlet

So how can people see Quayside Voices outside of Yule Duel?

We are VERY active on Instagram through the Stories feature, and we also post every few days. We also host two exclusive concerts a year (Spring and Fall) which we advertise on Instagram and Facebook. In the Summer and Winter you’ll catch us at local festivals (this past season you would have seen us at Uptown Unplugged, or our own River Market Busking series). We also get booked for alot of private gigs, so if people want to see us on their own terms – we can make that happen 🙂

I’ve been singing in choirs since elementary school. I got involved with the Gaelic choir after a visit to Scotland in 2001 to see where my Mother & Father were born. My maternal Grandfather & paternal Grandmother spoke Gaelic. I signed up for gaelic lessons at The Scottish Cultural Centre & was asked to join the choir. The rest is history & I’m still loving it! We were sent an invitation and had been looking for an opportunity to give back a little more to the community. We sing at a number of seniors homes several times a year, as well as performing at the SFU Tartan Day celebrations & The Kirkin’ o’ the Tartan ( blessing the tartan) at St. David’s Church in West Vancouver. We also do Robbie Burns suppers of course.

We sing traditional Gaelic & Scottish carols along with the usual Christmas songs.

We’re a small group but we make a mighty sound!

We have a 16th century Scottish carol that no one else performs.

King of the Jolly by a White Rock Celtic group called The Kailyarders whose lead singer is a former choir member.

So how can people see the Vancouver Gaelic Choir outside of Yule Duel?

We’re having our Celtic Christmas concert Sat. Dec.2nd, 2017 @2 pm at All Saints Anglican Church 7405 Royal Oak, Burnaby. Tickets are $15, Seniors & students $10 with refreshments afterwards included. We will be having our 35th Anniversary concert on June 2nd, 2018. I sang in the Calgary boys choir in the ‘70s. I played many instruments growing up, and when it came to University – I went first into piano performance, then started the PDP education program at University of Victoria and then after 12 years of teaching band, began teaching choir. It has always been my most passionate love in the area of music!

We often abbreviate Collingwood into “CW”. I was trying to come up with a W word and thought: when birds sing it is sometimes referred to as ‘warbling’ – and my favourite choir saying relates to birds: “if only those birds that sang best, sang – how silent would the forests be!” When I heard about the event, it just sounded so awesome! The idea of choirs singing out on the streets in the darkest time of the year – singing about beautiful things and the celebration of the season – and all for the purpose of raising money for an organization whose purpose is to help ease someone out of life with as much comfort as possible. Quite a positive thing to be a part of – with a whole lot of contrasts involved! It seems like a really good teaching tool about life for the students.

We have a few pieces that are of a more interesting style of mixed choral singing but also more traditional carol music from western European traditions.

This is our first year participating, so we are really going into it to just enjoy the experience and to raise money for May’s Place. We’re giving it our best shot at being our best – so who knows…?!

No real spin – just hopefully lots of energy and a lot of fun!

Since we have never participated in this before, I’m really not too sure. From the looks of it, there are some fantastic ensembles. We are only sorry that we will not be able to listen to them all as we will be singing at the same time as everybody.