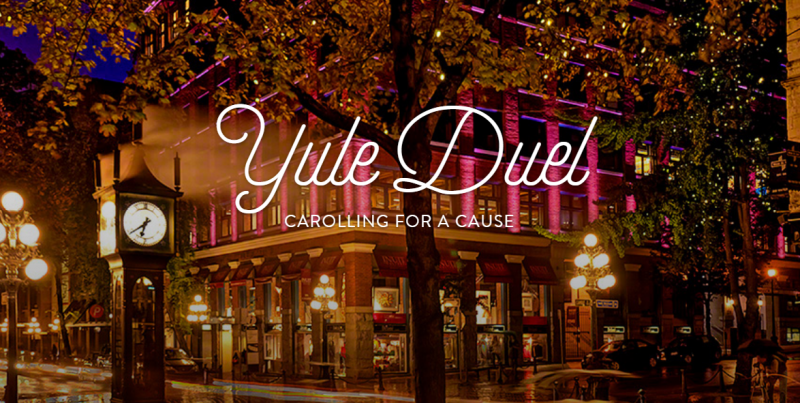 With over 20 choirs competing in Yule Duel this year, each group will bring their own special flair to the genre of Christmas and holiday music. There will be surprises galore throughout the streets of Gastown where creative choristers will enchant and delight event goers.

We had a chance to get to know a few of the choirs who are performance ready to duel it out on December 7th!

and The Notre Dame Platinum Girls and Iron Men When I first went to music school in 1992 at UBC, I had no experience in choral singing. My experience came from musical theatre and solo performances. As it happened, singing in one of the choral ensembles for 4 years was required for a Bachelor of Music degree. I was placed into the alto section – again, a completely new experience. I discovered my love for choral singing, thanks largely to the late, wonderful Dianne Loomer and I now love choral music. I’ve been conducting The Real Treble Makers Women’s Choir for 13 years and singing in the Laudate Singers for 21 years.

We were initially called the Mt. Pleasant Women’s Chorus which is a pretty boring name. After some discussion, we came up with The Treble Makers, only to discover that there is already another group out there with the same name. Our rehearsals can be rather ribald and blue so we decided to make ourselves sound a little nastier by calling ourselves The REAL Treble Makers. Seriously, we’re really very nice folks – most of the time.

A few of our members had been asking if we could take part. I had also heard about Yule Duel back in 2015 from another singer but I hadn’t been able to participate due to prior commitments. This year, I can, so I jumped at the chance.

We do two concert programs per year and we always have a specific theme. Sometimes, it’s a word around which I build a program; other times it’s a song or even a concept or a musical style. For example, one year we did all jazzy arrangements of Christmas songs. Another year, we performed all of Benjamin Britten’s Ceremony of Carols.

Several of our members work in environment and sustainability. One of those members suggested nature as a theme. This year, all of our Christmas repertoire features songs about nature. In the spring, we will be performing songs about water.

I have no idea but then I’ve never really been all that competitive. I just want to make music with 17 fabulous women. If we win, great! If not, another wonderful choir will get heard even more.

I’m especially honoured to feature local composers in our program. Bruce Sled’s “Ice” is a haunting soundscape about ice cracking. There are no words; just sung syllables and spoken sound effects. You can almost taste the cold winter wind when you hear this piece. Robin Salkeld’s arrangement of Gordon Lightfoot’s “Song For a Winter’s Night” is so lovely. My long time friend and caroling buddy, Lori Johnson arranged “Winter Wonderland” for my caroling group. We have borrowed it for this occasion. John Rutter, the grand master of English choral arranging does a delightful job of setting “The Holly and the Ivy”.

I have no idea and I don’t think that it matters. I just want to make music on the street with these amazing people. The fact that we’re raising money for a good cause is just a bonus.

I just listened to a bit of Gord Downie’s final solo album “Introduce Yerself”. Before that, it was a Tapestry podcast on CBC. I’m a good Canadian kid, eh?

So how can people see The Real Treblemakers outside of Yule Duel?

At Yule Duel, we are singing all of our unaccompanied pieces from a larger program called This Shining Night. The full program will be performed on Mon., Dec. 11 at 7 pm at Ebenezer Baptist Church on Fraser and E. 52nd Ave.

I’ve been singing since I was born! My sisters and I were “The Bye Sisters” on a CTV weekly variety show called “Banjo Parlor” in the mid-70’s. I have sung professionally since then; I taught choral music in North Vancouver for 35 years.

I can’t remember how we chose the name “Higher Ground”–but it fits. We love every genre of choral music, and sing it to the best of our ability!

Two of our members spent the evening last year at Yule Duel and came back to the choir saying it would be a worthwhile and fun event to participate in. We love taking part in events that have a target recipient for profits. May’s Place is a terrific example!

We sing every style of choral music! We love vocal jazz and a large segment of our spring repertoire is always jazz. We have learned a lot about our voices from singing world music–especially music from parts of Africa–but we also celebrate the choral heritage with music from past periods. A focus for us is choral music written by and for women.

We have some surprises for the audience for Yule Duel! We think our odds of winning are as good as any other group!

We will just be using our usual winning spin (plus a couple of visual aids) to give us an edge!

We are excited to listen to some other groups that are participating–we’ll have a better idea who our competition is when we see the other groups! It’s a bit of an unknown—fun!

So how can people see Higher Ground Women’s Ensemble outside of Yule Duel?

Our Winter Song concert is Tuesday December 12 at 7:30 at Highlands United Church in North Vancouver. Tickets online or at the door. I have a very musical family. We sang around the piano every Sunday and caroled from door to door with family and friends. I have been fortunate to sing in many choral groups from pop groups to the Vancouver Opera Ensemble.

How did the names of the choirs come about?

I made them up… lol!

Platinum Girls referring to the best 20 of our 150 girls. Iron Men because a lot of them are football players and play on the gridiron!

We were invited to participate the first year but were double booked.  Last year was our first year and we had no idea what to expect. It was an amazing experience! This year we are bringing fans!! We were thrilled to win last year. We will endeavor to entertain with the Christmas Spirit again this year.

This year we are going to the movies. And the IronMen and Platinum Girls will invade each other’s stage to sing together as well.

Last year we heard so many amazing choirs. I am sure they will all be bringing their “A” game. So how can people see The Notre Dame Platinum Girls and Iron Men outside of Yule Duel?

We are at the Vancouver Christmas Market on December 14th from 7-9pm as well as our sold out concerts on December 4th and 5th at Notre Dame.