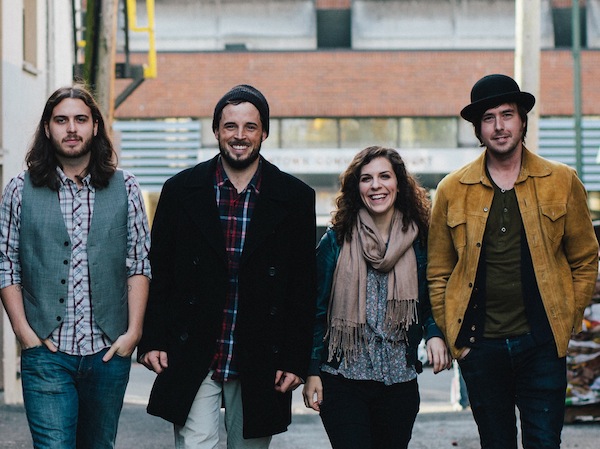 Could you tell us about your background in music?

Musically, I guess I can be considered a late bloomer. When I was 25, I lost a close family friend who was a huge Bob Dylan enthusiast. I found myself suddenly very interested in Bob’s story and started collecting his albums. At the time, there was a guitar gathering dust at the family cabin and I think I wanted to play my favorite Dylan songs around the campfire. I was particularly drawn to his storytelling ability, and as soon as I realized I could tell my own story with this guitar, there was no turning back.

How would you describe Coldwater Road’s sound?

Are there any artists/musicians that inspire Coldwater’s sound?

Dan Mangan, Jeff Tweedy, Willie Nelson. Mangan, for his ability to be strikingly honest while maintaining a sense of humor. Tweedy, for the willingness to be completely vulnerable in his writing. And lastly Willie, for teaching us that you need to maintain a light heart no matter what. “If you want to go fishing late at night, and you lose your bait and the fish don’t bite, that’s your red wagon and keep on rolling along.”

What are your thoughts on the folk music scene in Vancouver?

I think the Vancouver folk scene has a lot of good things going for it right now. The Vancouver Folk Music Festival is second-to-none, the city has a thriving open mic scene, and lots of local bars and venues are showcasing quality folk shows. What can people expect from a Coldwater Road performance?

How do you prepare for a live show?

I wait until I get to the venue and meet with the band before I write our set list for the night. I like to get a feel for the room and see where the band is at before we decide what to play.

Of all the venues you have performed at, what do you like most about playing at Guilt & Company?

The sound on stage is always great, the staff is super warm and never stuffy and the crowd offers the best of both worlds: a mix of rowdy bar folks, who are there to hear some great live music, and the quieter tables up front, who have come to be told a story.

What’s the most interesting moment you’ve encountered while playing on stage?

We once had a set interrupted by a mob of ‘hug monsters’. A group of people just busted on in and started handing out hugs to everyone on stage and in the audience before disappearing just as quickly as they appeared. A Hug Monster situation beats a ‘Freebird’ Guy situation any day of the week.

We heard about your work to help provide an after school music program with the Saint James Music Academy. Could you tell us more about your involvement?

The Saint James Music Academy is a free after school music program for low-income children in the downtown East Side. They operate seven days a week out of the Saint James Church on Cordova and rely completely on volunteers and fundraising. We got involved with them last year during the Peak Performance Project. We were invited to go down and check out the program in progress and were totally inspired by the kids’ enthusiasm. The Saint James Music Academy is making a really positive impact on the neighborhood. We’ve held a couple of fundraising events for the Academy and look forward to doing some more in the future. Anyone looking to get involved should check them out at sjma.ca.

We heard that you have played for guests on board the Via Rail train tour. What was that experience like?

Traveling across the country by train last year was one of the highlights of 2013. We had booked passage from Vancouver to Toronto and back, and every day you play three or four shows depending on whether you arrive at the station that day. We played our shows standing up rocking back-and-forth in one of the lounge cars with the people in the panorama car could listen from their seats at the top of the stairs. Often we were only playing for 4 to 10 people, but the intimacy of shows like that is unforgettable. Plus we sold lots of CDs!

Speaking of CDs, congratulations on recording your acoustic album, “Street Side”. What are some upcoming plans for Coldwater Road?

We are very happy to announce that we’ve nearly completed our first studio album, “The Woods”. We haven’t set a CD release date yet but we are aiming for late spring, early summer. At the end of March we will be taking four members to New York City to play at the ‘Americas Camp’ staff and camper reunion at the Highline Ballroom in Manhattan. ‘AC’ is a volunteer Summer camp for any children that were affected by the 9/11 terrorist attacks. I volunteered there during one of their first years. It’s going to be great to see some of those people again, and I didn’t play music back then, so I hope they’re going to be surprised.

Could you tell us what you have planned for your show at Guilt & Company?

I’m really excited for this show at Guilt and Co because we will be playing our first live show with a new bass player and a new banjo player. We usually play on Sunday nights, which is a band showcase evening, but Mondays are a folk night and so we won’t be playing with the drummer this time. It’s going to be a nice and cozy.

Last but not least, what is the best part about being a musician?

Knowing that Rock ‘n’ Roll can save the world. And the chicks are great!