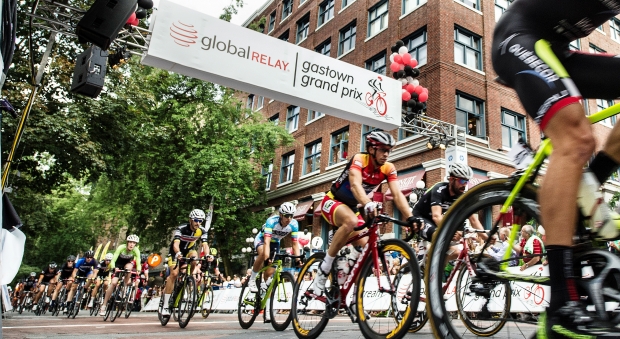 The Global Relay Gastown Grand Prix is an annual Canadian Pro ½ criterium race with a valuable and interesting history. Many of North America’s great names have raced the cobblestone streets of Gastown throughout the years. It is now regarded as one of the most popular one-day bike races in North America. Cycling pros like Alison Sydor, Ron Hayman and Alex Steida have thrilled GGP audiences with their stunning displays of racing brilliance.

In 1973, local coach and racing mentor, Dr. Roger Sumner conceived the idea to have a bike race in Downtown Vancouver and where better than Gastown. Sumner, a racer himself, wanted to organize a race that would attract locals and the public to the exciting world of top level bike racing in Canada. Gastown was the ideal location for a Crit. Reminiscent of villages in Europe with meandering cobblestoned streets lined with colourful cafés, historic buildings and faces filled with character, Gastown Grand Prix was born.

Dr. Sumner himself competed in the Gastown Grand Prix until 1978.

The first GGP was held in 1973. The racing around the tight course proved to be electrifying from the beginning. The race ended in dramatic fashion with Bill Wild, one of the finest sprinters of the time, trading punches with transported Kiwi and three time Canadian National Road Champion Max Grace while battling it out in the final sprint. Wild won the race and took home first prize, which was a colour TV. The 1970’s GGP races were contested by the finest bicycle racers in Canada. By 1976, 122 elite cyclists from Canada and even Mexico were signed up to race the GGP. In 1977, racers from the US made their first appearance at the criterium by entering 25 riders in the race. One of these riders was 18 year old Davis Phinney. Phinney later went on to become an Olympic medalist and winner of two stages of the Tour de France. In 1979, Canadian cyclist Alex Steida made his first appearance at the race as National Junior Track Champion. In 1980 Stieda, still a junior, would take his first victory in Gastown in front of crowds that now numbered in the 20,000’s. Emergence of the Pro Teams

The 1980’s saw the emergence of the first Professional racing category racers attend the GGP. Canadian Pro racer Ron Hayman, of Vancouver, won three titles at the GGP. In this decade, women cyclists began to establish themselves in the GGP with the emergence of a Women’s category. 1981 National Road Champion Verna Buhler of Canada won the first woman’s title in 1982. She would go on to win two more titles in next two years. The 90’s: Youth vs. Experience

The 1990’s saw some young and relatively inexperienced riders winning the GGP over older and more established racers. Many younger riders saw the GGP as a great opportunity to compete against more seasoned professional racers, with some of them producing breakthrough results. One of these was twenty year old John Mckinley, who won the race in 1992. A young 19 year old US racer named Jonas Carney also won the event in 1990.

The GGP took a nine year hiatus in 1994 after not being able to secure sponsorship. Due to the hard work and dedication of the Gastown BIA, The Pace Group and The City of Whiterock, the event returned in 2002 attracting 28,000 people to the streets of Gastown. With $10,000 up for prize money, Mark McCormack of the Saturn Pro team won with help from fellow teammate Canadian Olympian Svein Tuft. The Saturn Team was one of the top three Pro US teams at this time and its racers dominated the race. Kim Davidje, also riding for Saturn, won the womens race. In 2003, Germany’s Ina Teutenberg, one of the premier woman sprinters in the world at this time, held off Alison Sydor to win the race. Thirty five year old Gord Fraser was victorious in the mens event coming first out of 137 other riders.

US track team member for the 2000 Sydney Olympics, Jonas Carney of US came back to the GGP in 2004 and won the race for a second time. He first won the GP fourteen years earlier in 1990 as a 19 year old. Manon Jutras, 1994 Canadian Olympic road team member was victorious in the womans event. In 2009, the race again took another hiatus as it was without sponsorship until 2012, when Global Relay, a Gastown-based technology firm, made a multi-year commitment to bring the race back to Vancouver once again for the 2012 cycling season and beyond.

The streets are now filling up with fans as the riders ready their 2 – wheeled rockets. Gastown is electric and you can feel it. Come early for the race and enjoy some of our 24 Happy Hour Restaurants and Pubs.