Remembrance Day: Lest We Forget – Gastown 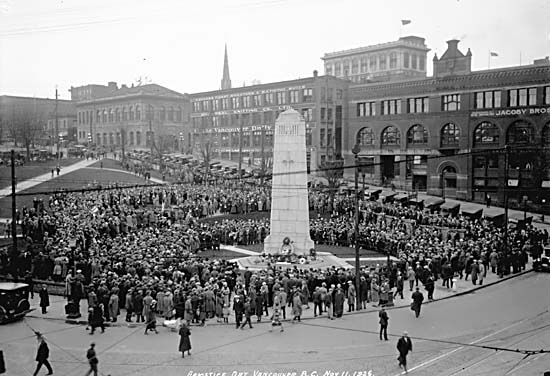 November 11th will mark Remembrance Day; an opportunity to take some time, either in private or in public, to recognize the sacrifice, honour, courage and strength of brave Canadians in the Armed Forces. We remember the many men and women that fought for the freedom, security and peace of our great nation. This Friday November 11th, a parade will take place with a ceremony to follow. Buy a red poppy, wear it with pride and come to the neighbourhood to show your support and acknowledgement for the great women and men of our armed forces who gave their lives for our freedom.

The city’s largest Remembrance Day Ceremony begins at 10 a.m. with a performance by the Vancouver Bach Youth Choir and Sarabande. At 10:10 a.m. veterans, military marching units and bands will be led to Victory Square by the Vancouver Flag Party for the cenotaph ceremony starting at 10:30 a.m. Shortly afterward, there will be a combined performance by Vancouver Fire and Rescue Services and the Regimental Pipes and Drums of the Seaforth Highlanders of Canada. At 11 a.m. the Last Post will sound. There will be two-minutes of silence, during which a 21-gun salute by the 15th Field Artillery Regiment will be heard from Portside Park. Lament and Rouse will follow. The Royal Canadian Air Force will conduct a fly-past moments later, weather permitting. In Flanders Fields will then be sung by the Bach Youth Choir and Sarabande and wreaths will be placed at the cenotaph.