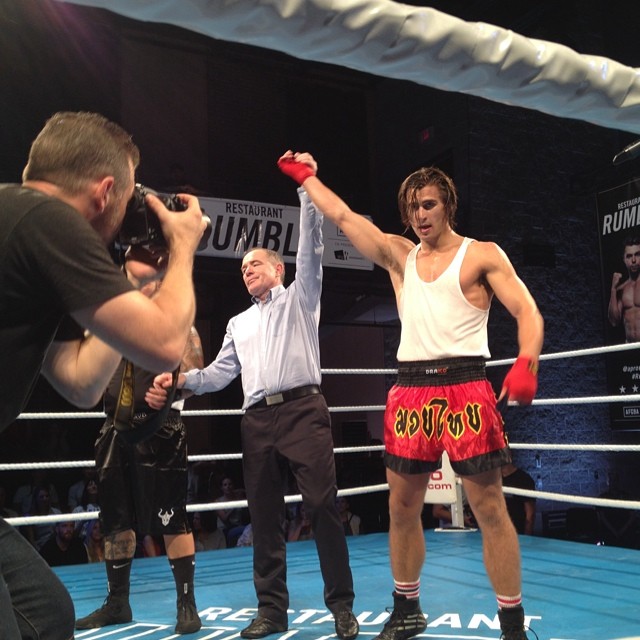 The Restaurant Rumble was started by a group of Gastown restaurateurs, drawing the majority of contenders from within the tight knit industry. Citing community and camaraderie as the leading reasons to get involved, boxers also committed to raising $2000 each to support the organization.

“Gastown restaurant workers have a sense of community and attachment to one another and the neighborhood,” noted Jolan Aubry from Blacktail Florist. “We work in the most beautiful area of the city by choice, and want to be a factor in helping it thrive.”

Held in the Fei & Milton Wong Experimental Theatre at SFU Woodward’s, the event got underway late in the afternoon with fourteen undercard bouts, featuring three one-minute rounds per match up. Medals were on the line for seven Gastown contenders and at the end of the set, both Aubry and Landon Bootsma from Industrial Light + Magic were successful in their bids, while Tosh Heath from Cork + Fin earned a draw against his opponent.

After a short break, the six championship title fights got underway, with two Gastown boxers among the contenders – Azim ‘The Landlord’ Wazeer from The Salient Group and returning fighter, Andrea ‘The Great’ Chromik’ from the big Blacktail Florist team.

This was Wazeer’s inaugural appearance at the Rumble and despite three hard fought rounds, he lost to opponent, Brian Petersen from Lululemon.

“I think I connected with some good shots,” Wazeer told the crowd after the fight. “He just got a few more.”

For Chromik, it was an opportunity to put everything she learned last year into action and take home the title. Going up against Sarah ‘Frisky’ Fraske from Cotto Enoteca Pizzeria, she was asked what she hoped to get out her sophomore experience with Aprons for Gloves. Her answer was simple.

“A stronger hook, a greater sense of community within the city of Vancouver…and a belt.” With fancy footwork and a determined glare, Chromik was able to stay one step ahead of her opponent to take the fight. Brought to her knees by the judges decision, she accepted the championship belt from two-time winner, Shay Washburn, and held it up high for the crowd to admire.

Founded in 2012, Aprons for Gloves Boxing Association is a non-profit organization focused on providing community outreach through the sport of boxing. Based in Vancouver’s downtown eastside, the group re-established a historic boxing program for at-risk women and youth, offering free mentorship and training to individuals who may not otherwise have the resources or support to participate. The sport of boxing teaches discipline, respect, hard work and self-control, resulting in positive self-esteem, good health and camaraderie among participants.