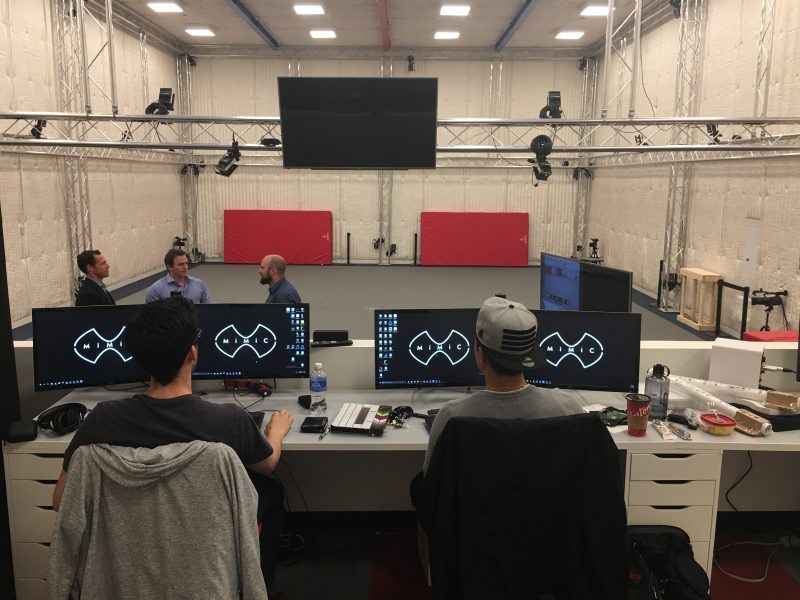 Gastown is always changing yet still stays the same.

The neighbourhood is home to a hive mind of artists, filmmakers, students, creatives and entrepreneurs. The willingness to take a risk, to be courageous, to make gold from lead is what started this place and it’s what Gastown is built on. And so it grows, from one form to the next, morphing into something else and becoming something wonderful.

Beneath the bustling throughfare of Water Street, is a state of the art motion capture studio, recently built by the newly formed partnership between Mimic Motion Capture Inc. and the Vancouver Film School. About a year ago – a vision was formed and then made whole by a team of hard working, passionate guys and gals who, in a way typical of Gastown, said: “We only have 2 months, we need 6….but sure, let’s get ‘er done!”.

And get it done they did.

This is a brief story of how it happened, the major players who played through it all and how Gastown once again proves to be “…a neighbourhood of possibilities” where if you can think it, you can do it. Tell me about the process of creating this project. What inspired the idea and what was it like building Vancouver’s largest motion capture studio in only two months? Graham: I met up with Ted for coffee one day and we began discussing shared problems in the film industry – the challenges new grads face in trying to break into the business, trying to stay current and on top of constantly changing technology and the difficulty in trying to find studio space in Vancouver. We quickly realized that all these common problems could be solved by creating a partnership that had never been done before. I needed space, I needed students that were eager to learn and I needed actors to do ‘mo-cap’ (Motion Capture Performance). All the afore mentioned problems were solved by building a commercial size stage inside a school and partnering with VFS. Ted: VFS was also looking for something new that hadn’t been done before. Graham had a vision, which aligned perfectly with the future expansion of the school. At VFS we excel in creating an immersive, brick & mortar, in person educational experience. As Vancouver continues to grow within a high level of schools offering studies in Entertainment Arts, the question of “How can VFS continually evolve?” remains constant. What is so fantastic about this partnership is that students enrolled in film based programs and in animation and game based programs can take specialized workshops with professional MIMIC staff where they can handle state of the art gear that they would only get access to after graduating and in some cases gear that hasn’t even hit the market yet. Jamie: We were tasked with crafting this studio in a very short amount of time. We decided on a suitable area here in the lower level of the building that fit the dimensions, requirements and specific sound proofing elements that Graham was looking for. I have a background in building radio stations and movie theatres and the idea was to create a space that separated MIMIC’s studio from the rest of the departments and that each area did not disturb one another. It was difficult to put a project of this scale together in only a few months. Everyone pitched in and worked around the clock to complete the studio as scheduled. Sledgehammers were swung in the early morning and well after dark, day after day. Even staff members came on board and helped out. A lot of hard work, sweat and passion went into building this space and the final result was really worth it. Gastown can be seen as a neighbourhood that is made up of diversity in layers, where we integrate rather than eradicate. The location of VFS on Water Street was once the site of Storyeum. How did you find the right location for the studio among its still existing multi tiered remnants? Jamie: We had to find a space that was the most under utilized in the building and this one in particular, with its pirate ship backdrop and shape, was the most suitable area for the studio. We had to do a lot of demolition to open up the space for the stage and ceiling structures. There ended up being far more demolition involved than we had anticipated. We dumped an entire trucks worth of concrete here from the Cordova side, down along the stairwells with only a week to do it. From my experience, there should have been a minimum of 6 months allocated to completing this project. We had two months. Ted: When you think of leaders, trailblazers and entrepreneurs – a certain mindset and vision is required to innovate and create new ways of doing things. Graham is a visionary entrepreneur with an educator’s mindset. We never would have created this partnership without that necessary elemental spark. Jamie is the same. When you think about the pirate ship – I think to be an entrepreneur, one must have amazing courage. These guys put their heart and soul into this and Graham put a lot of his own capital and skin into making this project succeed and I think of him as being kind of a pirate! And we’re not done yet. How much of the space will be split between professionals and students?

Graham: It’s a big investment and both MIMIC and VFS understand that the studio has to be commercially viable while still operating as a learning environment. We have to be able to make money, which allows us to keep the studio up to date. Doing a commercial shoot is like aiming an aircraft carrier; it takes a long time and there are a lot of moving parts. We set aside 40 days a year for students to use the studio, although this number is flexible. Ted: When Graham told me of the volume of work a booming studio would facilitate in a year, I realized there would still be enough time to do something really special. Even with 40 days, we will still be able to provide a lot of state of the art training to students and faculty. Why is VFS in Gastown? Why are so many artists, filmmakers and creatives drawn here?

Jamie: This is Hollywood North and it seems that Gastown is where everybody does their major on location shoots. The whole area in and around VFS is always buzzing with multiple productions throughout the week. There is a lot of heart to Gastown with its beautiful architecture and good energy. Graham: When we had our grand opening, I couldn’t believe how many of the industry professionals that attended were local to Gastown. We had companies saying: “We’re literally across the street”, or “We’re above this bar on Water Street”. There are companies we didn’t even know were here that are located right in our backyard.

Ted: I think we have reached a critical mass in film production related knowledge and expertise in the city. Since I left visual effects in 2005, the growth of the industry has seen a 20 fold increase in the labour force. When you build up to that level, more and more shows want to do post production here, they want to draw on your talent pool and use the skills and experience that is available. Gastown is no longer a young film community but a mature one. In the coming years, we will see more independent productions originating in Vancouver and Gastown is moving towards being the centre of it all.