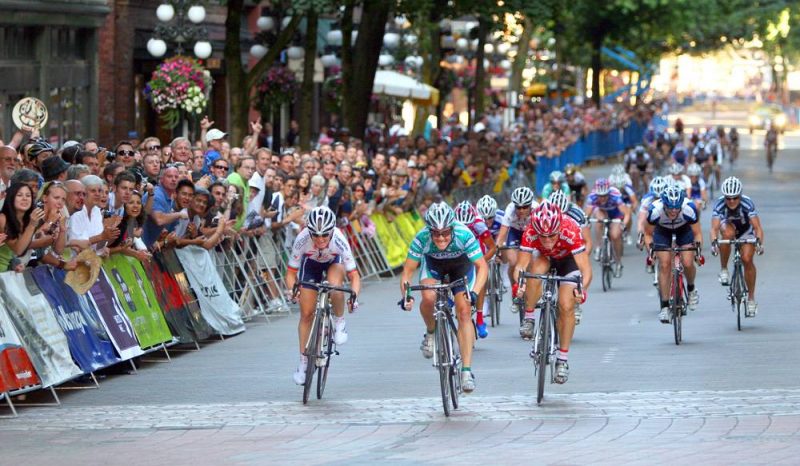 This July 12th, the cobblestoned streets of Gastown will be transformed into an exciting race track where professional cyclists from all around North America will compete for the coveted first place prizes in the oldest and one of the most popular criterium races in Canada. Cycling greats like Ron Hayman, Alex Steida and Alison Sydor have thrilled GGP audiences over the years with their displays of racing brilliance. Coming round the corner in 1973. Fox & Fluevog (before Fluevog Shoes became Fluevog shoes!) is just behind the bikers as the come around Maple Tree Square.

Dr. Roger Sumner came up with the idea to have a bike race in 1973. He wanted to create a quality race that would be highly accessible to the public and Gastown, with its historic character-filled, twisty cobblestoned streets lined with cafes and restaurants, fit the bill. Sumner himself competed in the Gastown Grand Prix until 1978. He was later inducted into the BC Hall of Fame for his 30 years of service to the sport in the roles of racer, coach, manager and racing organizer. (Tragically, he died in 2000 after being hit by a car while riding his bike.) The first Gastown Grand Prix was held in 1973 and racing around the tight course proved to be electrifying from the beginning. The race ended in dramatic fashion with Bill Wild, one of the finest sprinters of the time, trading punches with transported Kiwi and three time Canadian National Road Champion, Max Grace, while battling it out in the final sprint. Wild won the race and took home first prize, which was a colour TV. By 1976, 122 elite cyclists from Canada and even Mexico were signed up to race the Gastown Grand Prix, and in 1977, racers from the US made their first appearance at the criterium, entering 25 riders. One of these riders was 18 year old Davis Phinney, who later went on to become an Olympic medalist and winner of two stages of the Tour de France. August 5th, 1975  –  Exhausted riders sprint for the finish. The rider on the left, Brian Keast of Coquitlam, won the race. Bill Wild of Port Moody on the right was second. Riders make their way along Maple Tree Square and up through Water Street. Save The Date – Wednesday July 12th and plan to spend the day and evening in Gastown. Come for the many Happy Hour specials throughout the neighbourhood along with the opportunity to shop and get your spot with the best view of the track. Come join the party and cheer on the exceptional athletes as they race for glory in The 2017 Global Relay Gastown Grand Prix!