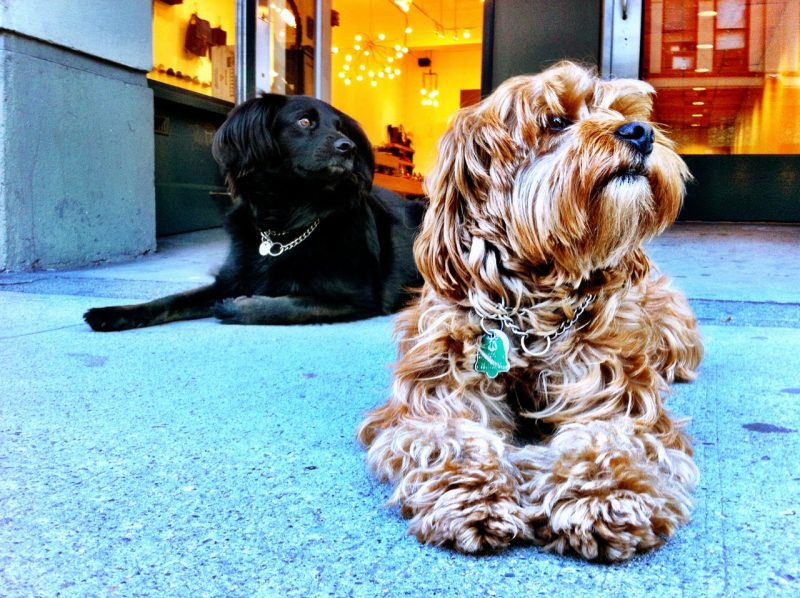 If you’ve shopped for footwear in Gastown, you’ve likely already met the ebony and ivory duo, Juno and Laila. Using two distinct sales tactics to attract new customers, they’re among the most successful canines ever to grace a sales floor.

With fabulous blond locks that are a credit to her Cockapoo lineage, Laila is the official greeter at Rowan Sky (rumour has it she’s being head hunted by Walmart). Her raging foot fetish means she’s often the first one to check out the sitch south of your ankles, and if you sit down to try something on, she’ll make sure you stay put by taking up some valuable real estate on your lap.

We’re not sure how Laila got the nickname, Honey Badger, but we’re guessing it’s because she’s smart, skilled with tools and generally pretty bad-ass. She’ll wink at you if you’re talking about her and chase things only if she knows she can catch them. And much like Howie Mandel, she’s not into handshakes, but she’s all about the high fives, so the next time you’re in the hood, stop by and get a few cuddles from this five-year-old.

Also in the mix at Rowan Sky is five-year-old Border Collie / Spaniel pup, Juno. Adopted from the shelter when she was just a year old, ‘June Bug’ is as calm as they come, unless you happen to be holding something that resembles a ball. Juno has mad skills. When it comes to blending in, she easily disappears into any black carpet, and she’s quick to sniff out blood sugar irregularities in those who suffer from Type 1 Diabetes – true story! Able to keep her happily wagging tail under wraps, Juno has been known to put on a sad face and sit with her chin drooped on the shop’s front windowsill. When people step inside thinking she needs to be rescued, they usually end up getting shoes. She’s on commission.

And, when it comes to office dogs, this Gastown newcomer is eyeing up her competition.

Still just a pup, one-year-old Zoe is mixing things up at Bench Accounting. We’re pretty sure her big, brown eyes were the inspiration behind her name and the reason she gets some serious Insta-love from her co-workers. But, she’s also got a devilish streak that generally has them chasing her down to retrieve whatever she has between her teeth – like receipts. In her off hours, Zoe has a penchant for tackling pillow cushions and is quick to scoop up stray ice cubes. We’ve also heard that she enjoys a good gallivant through the shrubbery. Perhaps a Monty Python fan too?

We’ll be back in a few weeks with more Dogs of Gastown – Holiday Edition. If you know one, be sure to snap a pic and tag us on Instagram (@mygastown) or tweet us @gastown.