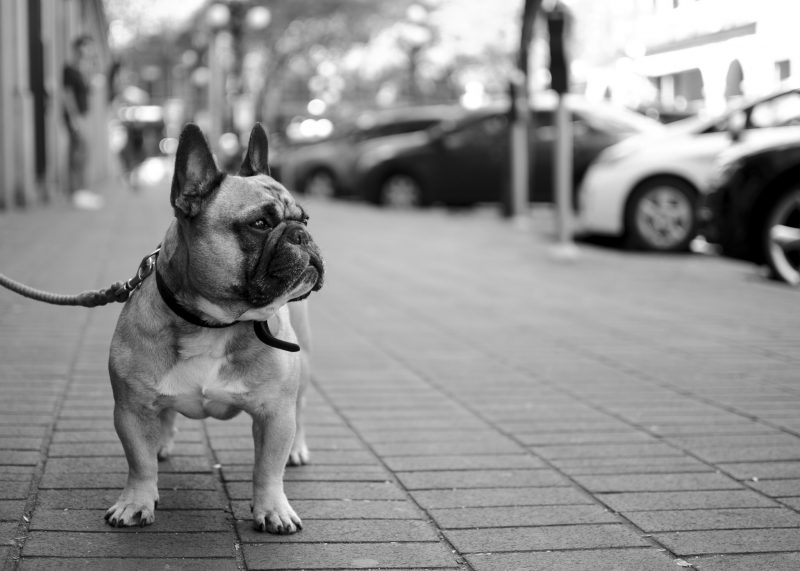 It might seem like a long name for a small dog, but that’s only if you haven’t met him yet. Louie is a Gastown fixture, recognized everywhere he goes. Usually found just inside the door at FortKnight Men’s Boutique, he’s one of the most photographed dogs in the neighbourhood.

Last week, Louie made his small screen debut on Breakfast TV, stepping in to anchor a segment with owner, Rocco. Completely reserved during shooting, his four-year-old ways were under wraps until the cameras were gone. Basically, he’s a twerp, and everyone loves it. Sensing his growing fandom, Louie has joined Instagram, @professor_louie_valentine – so check him out.

This four-year-old cross brings a little mix to the neighbourhood, crediting his good looks to his diverse lineage. Think Chocolate Lab meets Pointer meets Rottweiler… meets goofy stare when someone is holding an orange ball and asking them to look directly into the sun for their official portrait. Adopted from the SPCA when he was just eight weeks old, Hunter spends his days doing programmy things and working security at RosterBot – or more accurately, according to his co-workers, eating lunches that aren’t his. Not to be outdone by his fellow ‘Dogs of Gastown’, Hunter is pretty big on Twitter (@DroolRules) and has just entered the world of Instagram (@hunter.drool.rules). A self-proclaimed hipster dog, he’s quick to get the word out on animals up for adoption, has a colourful relationship with his ‘domestic panther’ and is clearly a fan of Wednesday’s…

Having just celebrated his first birthday, Bruce is lucky to spend his day taking up a large portion of the floor in his owner’s office. It’s an arrangement that allows him to get out on the streets of Gastown, where his good looks have most passers by reaching for their iPhone. In fact, while getting setting up for this shot, a guy stopped to capture the moment, mumbling – ‘It had to be done’. There’s no question that Bruce adores the attention. Tempted by treats, he was happy to pose (laying down, of course) for as long as the shutter kept snapping. He’s used to it. Bruce has his own Instagram account (@lilbrucestagram) and he’s on Twitter @saint_bruce – what can we say, he’s already a legend.

We’ll be back in a few weeks with more Dogs of Gastown. If you know one, be sure to snap a pic and tag us on Instagram (@mygastown) or tweet us @gastown.