The Steam Clock Gets its own Getaway This Fall – Gastown 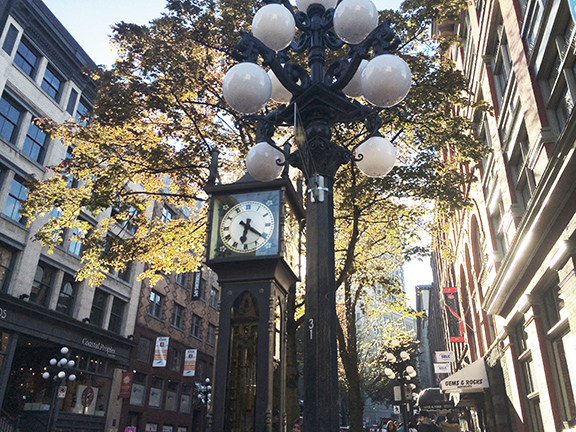 A City of Vancouver crew will be in Gastown today to carefully remove the Steam Clock from its pedestal and transport it back to their fabrication shop at Manitoba Yards.

The Steam Clock recently celebrated its 37th birthday, a surprise to some who take its Victorian-era good looks at face value. The clock’s time-keeping mechanism was based on a design from 1875, but horologist, Raymond Saunders, built the clock in 1977 as part of the neighbourhood’s revival.

Visitors linger along Water Street, waiting for the clock to send it’s musical blast of steam skyward, taking enough pictures to catapult Saunders creation to World Class status. And with a bronze exterior designed to last at least another hundred years, the insides are getting an upgrade that will allow them to keep up.

The mechanical moving parts of the Steam Clock’s ball loading device have been slowly wearing out over the decades. The team will be making repairs to that section, restoring the clock’s reliability for residents and tourists alike.

Expected to take several weeks for repairs and a thorough cleaning, the repairs have been timed to coincide with the end of Cruise Ship season, with the expectation that the clock will return on December 15th, just in time for the holidays.