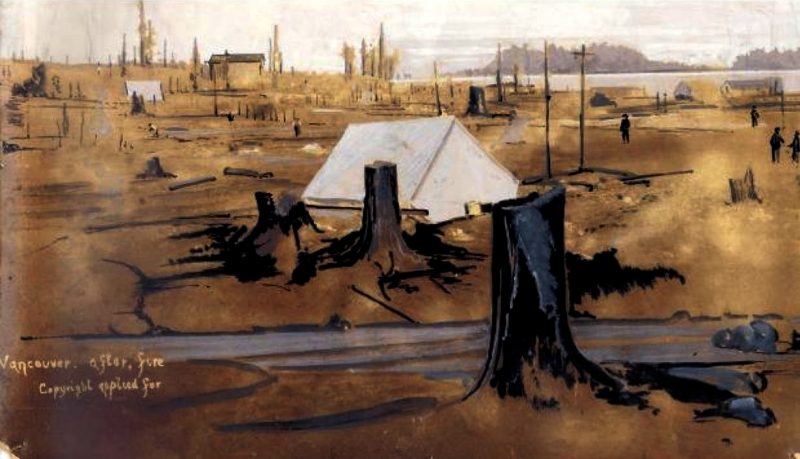 In 1867, John “Gassy Jack” Deighton, the industrious British sailor who turned a barrel of whisky into a rollicking bar in Gastown, knew that opportunity was ripe on the south side of the Burrard Inlet. His long winded, garrulous nature infused with a fervor to establish the alcoholic equivalent of a burgeoning lemonade stand, against many odds, set this risk taker as the front line band leader of a present day company of courageous entrepreneurs, all marching to the same beat.

Vancouver was incorporated in 1886. That same year, “The Great Fire” tore through the infant town before it saw it’s first birthday. Our founders stood tall, as the callow phoenix, now in forced maturation, rose from the ashes of disaster to lay brick, stone and tile; a past monument to present day inhabitants.

So today, we toast the prosperous and the innovative, the visionaries and the entrepreneurs – our fantastic and colorful community of Gastown – then and now. Once completed in 1887, the Springer-Van Bramer Block attracted retail and business occupants, as well as social groups, to the area. Retail was located on the first floor, offices on the second and meeting spaces up on the third. The building is also known as the Masonic Temple after the Masons and Odd Fellows made the top floor their home between 1888 and 1901. It has undergone few alterations since being built, except for the removal of its cornice due to safety concerns. Today you’ll find Durant Sessions, Timbertrain and The Greedy Pig.

Holland Block – at the tip of Water and Cordova St.

The Holland Block was constructed in 1891-1892 in the style of Victoria Italianate. The Holland block is a flatiron masonry building built for James M. Holland, a Vancouver real estate developer at the time. Its triangular orientation sits facing the junction of Water and Cordova streets. The pie shaped building allows street level retail stores open access to two street frontages. San Franciscan architectural influence is seen with the repetitive use of the broad bay windows, allowing much light and space into the block. Ground floor cast iron columns, manufactured by B.C. Ironworks enabled large storefront windows which maximized merchandising display space and also took advantage of natural light. Stroll over to the Holland Block today to enjoy a hot cup at the Buro Espresso Bar, then on to One of a Few for a fashonable browse. When the sun goes down, go below Holland to get your dance on at the M.I.A nightclub. The Boulder, located on the NW corner of Carrall & Cordova, began as a 2-storey structure in 1890. The Fripp Brothers (Robert and Charles) designed it for the American tunnel builder turned real estate mogul A.G. Ferguson. Unique for its time, the building is an external stone masonry construction complimented by plain sash windows – it’s faced with sandstone over a granite foundation. Today, the Boulder is inhabited by Bauhaus – a restaurant at the cutting edge of fine dining, delivering innovating techniques, fresh flavours, and exceptional service to Gastown.

Constructed initially as a warehouse, The Kelly Douglas Building, was built for a wholesale grocery firm founded in 1896 by Robert Kelly and Frank Douglas. The two men prospered largely by supplying prospectors with provisions during the Klondike Gold Rush of 1898. Mr Douglas would travel North, each summer for business. In August 1901, after spending two months in Dawson City, he was headed back to Vancouver and the ship he was on, the “Islander” sunk when it hit a hidden iceberg six miles northwest of Juneau in Lynn Canal. Forty passengers succumbed including Frank Douglas.  Legend maintains that between $50,000 and $60,000 was lost with him – he had stashed his precious gold in his clothing. His was succeeded by his brother Edward in the firm. The residents of The Landing today are led by Steamworks, along with the Steamworks Wine and Beer Store and the Vancouver Whitecaps.

So happy birthday Vancouver. Everything’s changed and nothing’s changed. And here’s to Gassy Jack, standing tall above the whisky barrel that started it all, chuckling silently to himself, happily watching our city’s magic unfold.