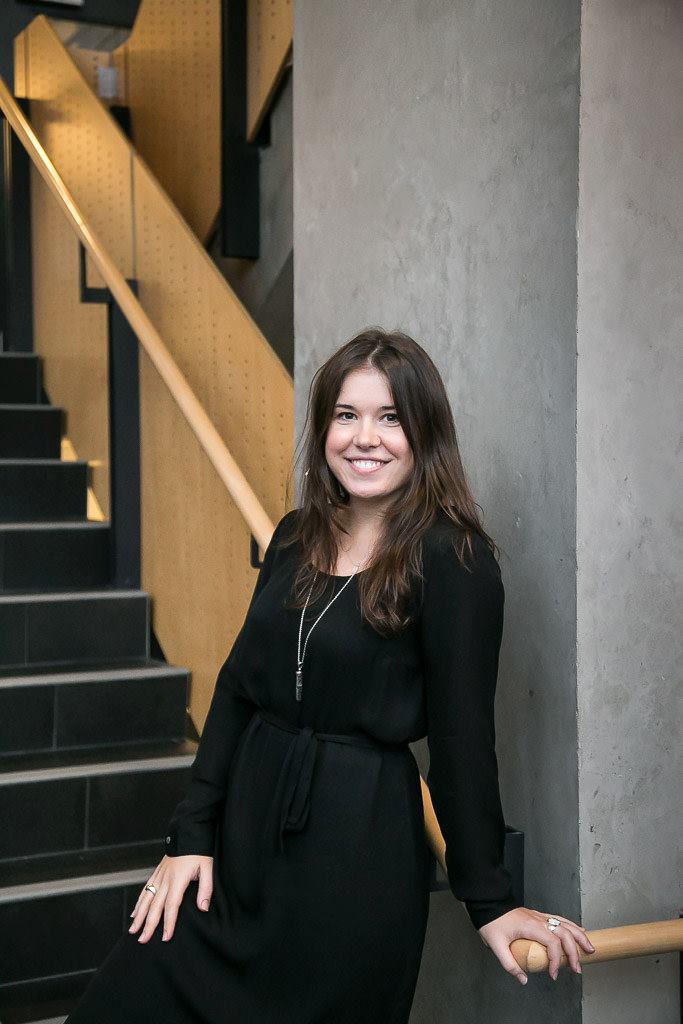 Easily one of the most well recognized names when it comes to Vancouver designers, Nicole Bridger is a pioneer in eco-fashion. Her boutique recently relocated from Kits to Water Street and she’s got big plans for growth and celebration in 2015.

Bridger started sewing when she was thirteen, but it wasn’t until a few years later that she saw it as anything more than a hobby. Her high school sweetheart was the son of footwear legend, John Fluevog, and in spending time with the family, a light bulb went on.

“I realized that I could do something that I loved creatively and make a career out of it,” she explains. “I figured it out as I went, it was a case of what do I need to learn and who can I learn it from.”

After a trip to New York with the Fluevog family where she met designer, Vivienne Westwood, Bridger applied to Ryerson University. In the third year of her BAA program, a student exchange to the UK presented Bridger with a unique opportunity to turn her brief encounter with Westwood into an internship.

“When I got to London, I went to the studio with my portfolio only to find out that they had already filled all their intern positions. I left, but after getting halfway down the block I turned back and said – please, this is the only reason I’m here. Give me three days to prove myself.”

And prove herself she did. Nicole earned a spot with the label and eventually one-on-one time with Westwood herself. There was much to learn when it came to draping and layering, but it was also a chance to ask a few burning questions about the industry itself.

“I’m not a fashionista. I don’t take it so seriously, but being in fashion school, I worried that I would have to sell my soul to make it in the industry. She showed me that it’s possible to just be yourself.”

Nicole returned to Toronto to complete her degree and then headed back across the country to Vancouver to start a business with a friend.

“I had worked a couple summers with Chip Wilson at Lululemon, so I called him up to get some advice. I sat on his couch for a couple hours and in the end he said – don’t start a company with someone else, start one with me.”

The pair launched Oqoqo in 2006, pioneering eco-fashion in Vancouver and allowing Nicole to get her hands into every part of the business. Two years later, she took that knowledge and founded Nicole Bridger Designs (NBD). Taking everything she believed in and all that she’d learned from mentors along the way, Nicole sought to make positive contributions to her community and have less impact on the environment.

“I always wanted to do more than just make clothes. I wanted to have some kind of positive impact on the planet. I was born and raised here, with the blue bin and every school play being about reduce, reuse, recycle, so for me, it was an integral part of the creation of my company.”

NBD sources ethical materials, including renewable and in many cases biodegradable fabrics. The company goes to great lengths to ensure that the suppliers are also sustainable, taking into consideration their processing, manufacturing, packaging, distribution, and labour practices.

Ninety percent of the Nicole Bridger line is manufactured in Vancouver at a factory that she owns. Bridger bought the facility in 2012 when its owners decided to retire and considered closing it permanently. “It’s been a huge transition, but I really like seeing the changes. We’ve created this incredible sense of community among the staff.”

Bridger and her factory team recently participated in Fashion Revolution, a global movement that encourages consumers to wear their clothes inside out in support of systemic reform of the fashion supply chain. The question, “Who made my clothes?” is one that few can answer, and being curious can lead to more people doing something about the impact that the industry has on both people and the planet. Putting Down Roots in Gastown

The move to Gastown puts Nicole closer to her factory and ultimately satisfied a nagging voice in her head. “It kept telling me – Gastown. Within a couple days of being here, we felt like part of the community. We were home.”

The shop itself is warm and inviting, with a relaxing living room space that encourages visitors to sit down and relax.

“Having a space for conversation is so important. All change starts with conversation so creating a space where one can have that is great. The store isn’t just about clothes, we do workshops, events, fundraisers and I wanted it to be a space where people could come in and connect with one another.”

The summer collection, called ‘Keep Steady’, is in store now and fall is just around the corner. NBD silhouettes are modern, classic and figure flattering, as well as comfortable. For Nicole, it’s got to fit your lifestyle, you’ve got to be able to wear it a couple different ways and it’s always about the fabric and how it stands up to life.

“I take design season as a time to reflect on the life lessons because they inspire a conversation with our customers. The fall collection will focus on joy and intuition – prioritizing, simplifying and letting joy guide the decisions rather than fear, because fear can navigate you into a completely different place.”

The names of each piece reflect her commitment to making personal development and introspection part of the experience, with the Keen dress, Patience tee and Grow skirt. “I believe that there’s an opportunity for fashion to show up in an entirely different way. There’s a very intimate relationship that you can have with your clothes, one where instead of feeling like you need to be someone else, you’re really connecting with who you are. And I think that’s the side of apparel that I really love and get excited about.”

For more on Nicole Bridger Designs, visit their web site here or stop in and see them at 14 Water Street.