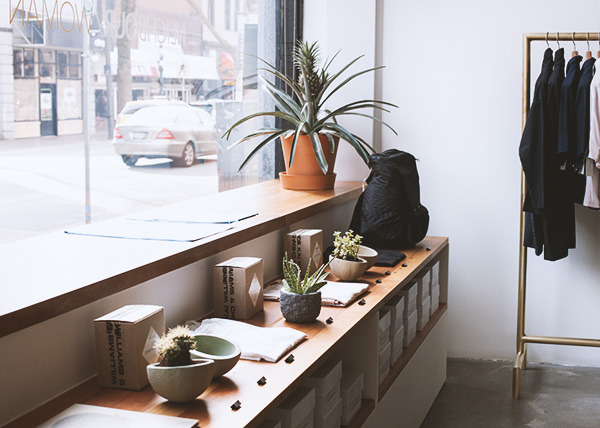 As the sister store to Neighbour in Gaoler’s Mews, the new shop is everything you’d expect. Carefully curated and thoughtfully merchandised, it offers the same distinct experience for women as the original store does for men.

“The idea of expanding Neighbour has always been in conversation, it was just a question of how,” notes Justin Lintag of Neighbour. “When the opportunity arose to move into the new space, the idea for Neighbour / Woman fell into place quite naturally.”

As an influential destination for menswear, the requests from their clientele for women’s apparel had been on the rise for some time, providing further incentive to find a suitable location for a new store. “We were getting our fair share of women visiting the shop either with their husbands, boyfriends, fathers, brothers or even for themselves at times,” he explains. “Many of them were also following some of the brands we carry and we’d always been asked if a Neighbour equivalent specifically for women would ever come to fruition.”

Saager Dilawri, the owner of both shops is an icon in the Vancouver scene. Having studied at Parsons School of Design in New York, he has consistently been named one of the most influential retailers when it comes to men’s fashion in the city. “We did some light renovations and added our own fixtures and interior detailing, but it was nice that Inventory had left us with such a cleanly designed space to work with,” notes Lintag.

Now that the doors are open, women can expect to find the same variety of products, from clothing to footwear to accessories for the home. There will also be some crossover between the two stores as some products are inherently unisex. When it comes to fashion, women will be able to get their hands on the counterparts to the brands carried in the men’s store, including Acne Studios, Christopher Raeburn, Stephan Schneider, Christophe Lemaire, Sunspel, Niuhans. The new location is also stocking jewelry and accessory collections from brands like CDG, Common Projects, Saskia Diez, Monica Castiglioni and Kara Bags.

To meet the needs of both shops, Dilawri plans to launch a redesigned online store at the end of March. Then, in April, Neighbour / Woman will get it’s official grand opening as the original location celebrates it’s fourth anniversary in Gastown.

So what’s in store for the future? Well, Neighbour is well known for it’s creative collaborations and many will be keeping their eyes open for a hint of what’s to come on the women’s side, something that Lintag isn’t ready to dish on quite yet.

“Potentially in the future, but at the moment, we’re really focused on getting a good reception from everyone on the new store and having a good first season.”